Hide Search
You are here: Home / Archives for Christmas house 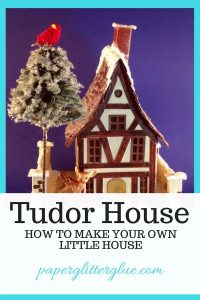 I am almost finished with the Tudor house which they call a "Half-Timbered House" in England.  The base is drying and that's about all that needs to done. Here's a photo of the quick sketch I did to make the pattern. Structurally, the … END_OF_DOCUMENT_TOKEN_TO_BE_REPLACED

I finished this house last week - the Coppertop Clock House. It's made from the template I custom ordered from Accucut. I added an extension on the front. I am unsure about using the horse and buggy in front. I think I will make one in … END_OF_DOCUMENT_TOKEN_TO_BE_REPLACED 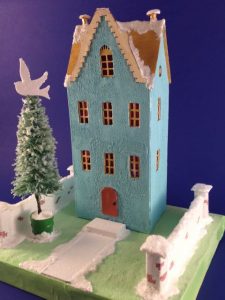 Here is the finished Amsterdam Canal Paper House that I talked about in this post. Compared to some of the houses I've made this one is relatively easy. I think this is one of my very favorite houses. I had fun making it … END_OF_DOCUMENT_TOKEN_TO_BE_REPLACED 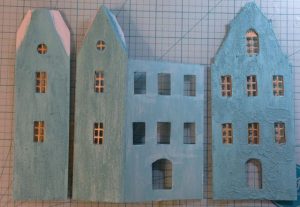 Canal Houses in Amsterdam - Inspiration for a new Christmas Putz House I'm now making a Putz house based on the delightful houses along the canals in Amsterdam. These houses were built during the Dutch Golden Age in the 1600s when there … END_OF_DOCUMENT_TOKEN_TO_BE_REPLACED

One of my Halloween houses was done in a steampunk design - industrial looking with metallic locks and keys. When it sold several people were sorry that they didn't buy it when they had an opportunity. One of my coworkers specifically asked … END_OF_DOCUMENT_TOKEN_TO_BE_REPLACED