Why Write this Paper Crafting Blog?

I decided to start this blog because I am busy making lots of little Halloween cardboard houses to sell for the Head Start school we support for Christmas. I kept posting them on my "Green in Greenville" blog which was mostly about what I've done to make my home (and family member's homes) more energy efficient. I am very serious about energy efficiency and conservation of resources so my crafty articles didn't match very well with that blog. Hence this new paper crafting blog. It frees me up to be more creative.

For my first post I am going to show you photos of the Halloween cardboard houses I've already finished, I hope you enjoy them. Each house is named and I'll give you a little background on each one. They are listed below in roughly the order that I made them. I've got a total of 20 houses, though I'm not posting all of those in this post. (UPDATED May 2021 - I've probably made over 200 houses by now.)

Three Gable Gothic is the name of this house. I wanted the gables to be elongated and kind of spooky. The eerie tree is made from an obsolete Tim Holtz Sizzix die. To make it stand up, I cut one tree in half and glued it to the back.

For the base, I debated over and over and finally glued it to a cardboard book I made. I am very happy about how it looks. 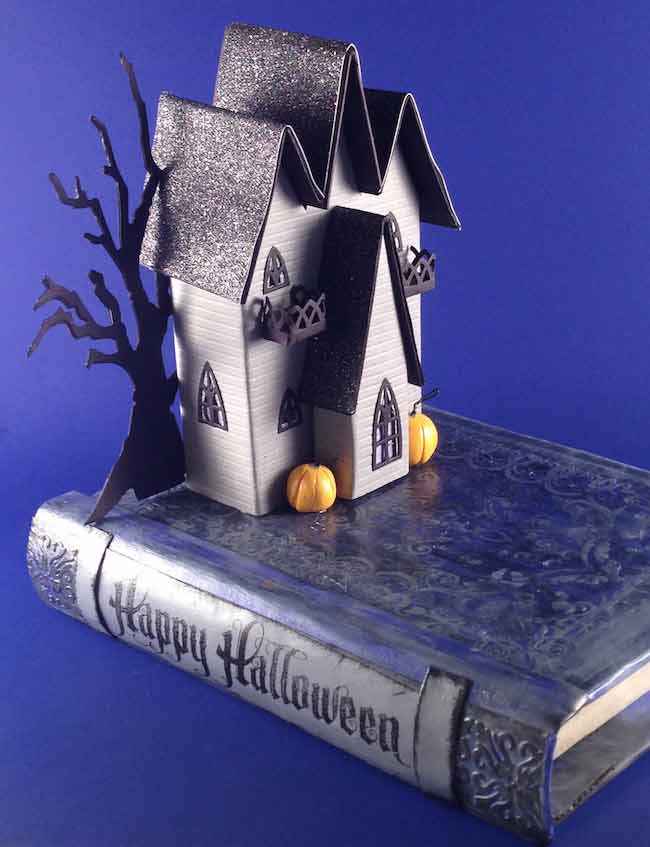 I call this house - 5 Gable Gothic. I think I did a much better job on the arches and the roof on this pattern. I like the arched windows too. This one also needs a base and decor. 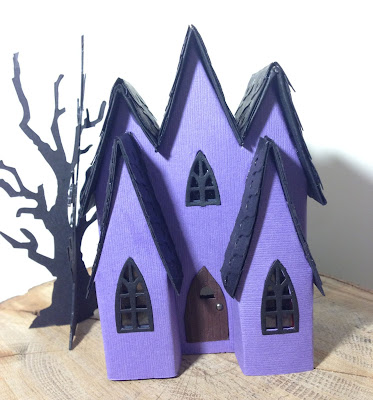 This house is just called the Green House. It's based on a style of little cardboard houses called "Hacienda" houses. It's another house that is not on a base or fully decorated which will make a huge difference in how it looks. 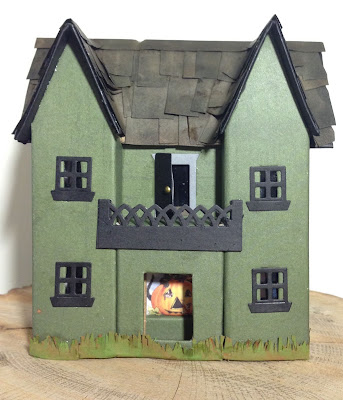 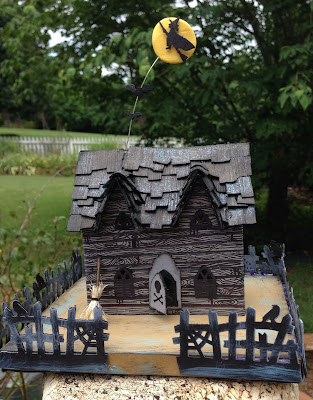 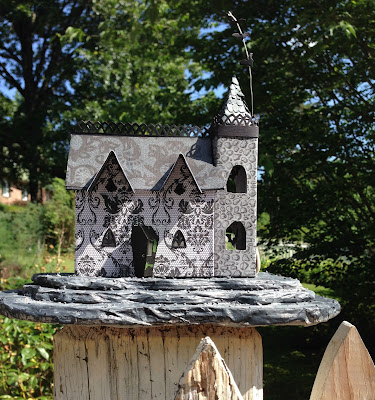 The Silhouette House is a very fun house because all of the windows and even the door have silhouettes in them that look great when light shines through them. I really like this house. Again - gotta put it on a base and add some halloween decor. 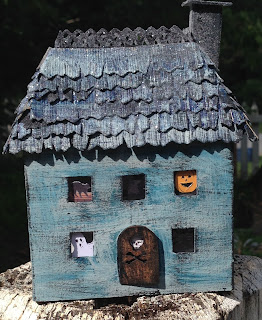 These next two are two of my better built houses as they are very sturdy. The one with the keys and locks is called Steampunk Key house. It is my artsy fartsy house according to John. I worked really hard to make all the keys and locks and to make them look like rusted metal. Even the chimney has a keyhole shape as the opening. I also like the base. See how it completes the house.
The house below it is called the Clockhouse on a Frosty morn. It is probably my prettiest house. The fence is really cool. The fence is a combination of a Tim Holtz halloween fence and a retired Martha Stewart Halloween fence punch. I also made pillars to support the fence well. 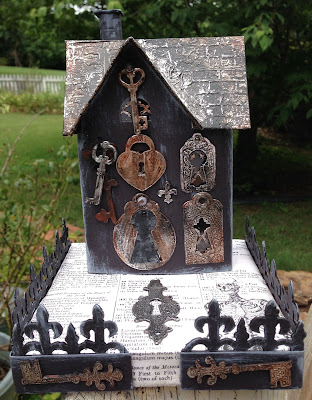 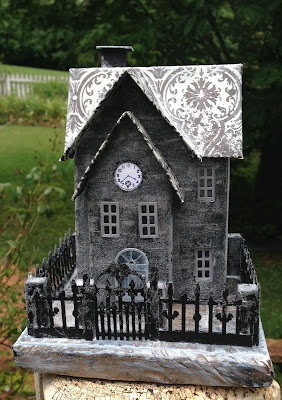 Here's a better view of the Clock House. 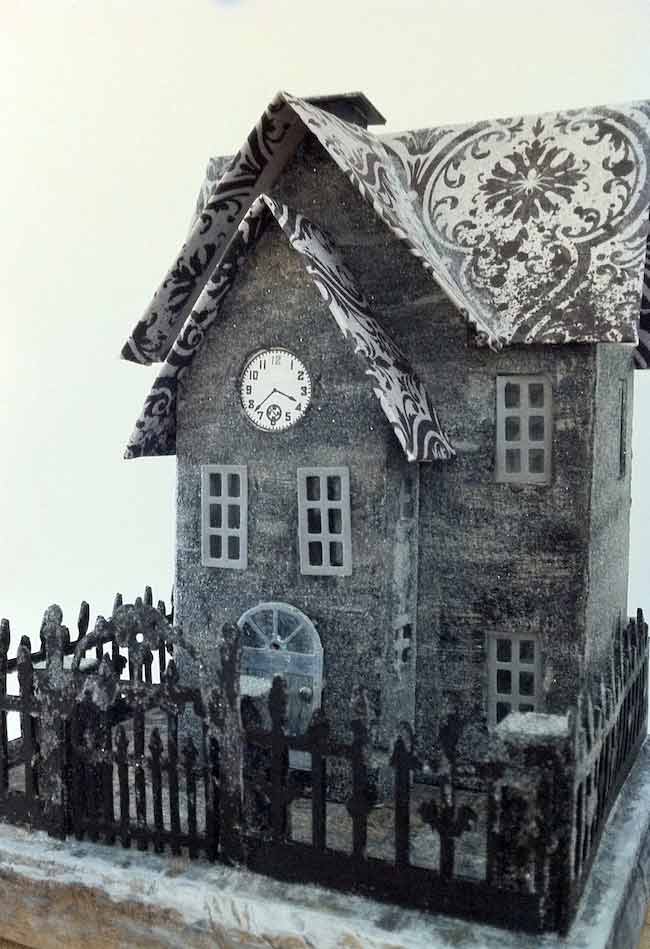 And the last house I made is the "Black Hat Inn". It has a lot of features that took a long time, but were very fun. The witches on top spin. The hat comes off so you can put an LED candle in there to shine through the triangular dormers. The base is made out of a cardboard cylinder and paper mache to look like tree roots. I made the spooky tree from a die from LaLa Land. I made a polymer clay cauldron and a ghost doorman. Free Parking refers to where the brooms may be parked. The fence is mostly the retired Martha Stewart fence with a Spellbinders (I think) gate. 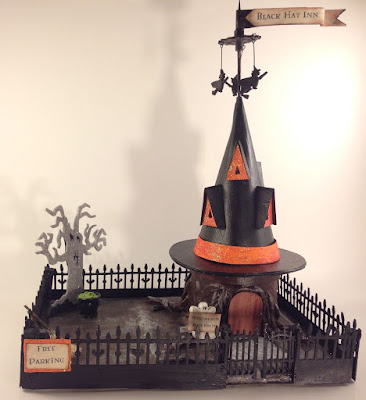