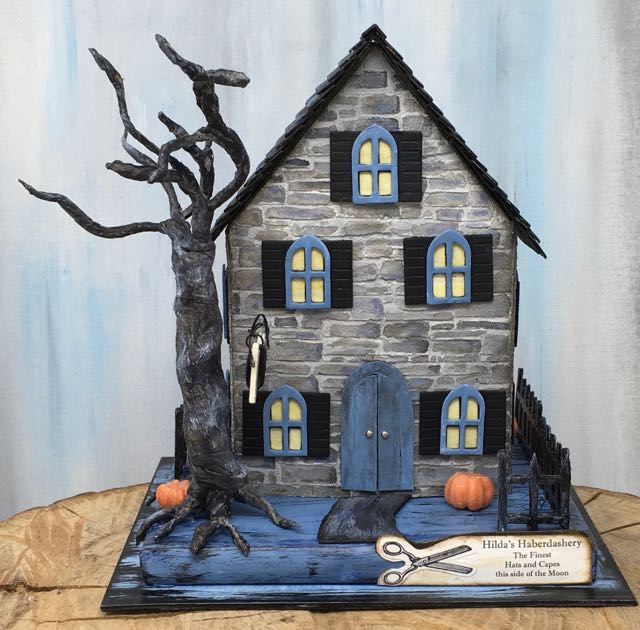 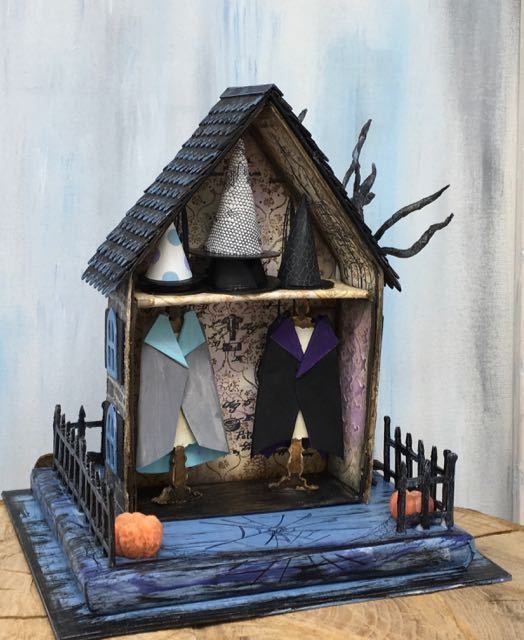 Why did this topic pop into my head?

Well, I have been honored as a guest designer for Frilly and Funkie’s most recent challenge theme - Haberdasher chosen by Zoe Hillman. She almost always embellishes her incredible projects with sewing of some kind. The directions to this challenge are to create a vintage or shabby chic project including items found in a Haberdashery.

After reading the definition, I decided to make a tiny shop that sells witches' hats and capes even though these items might not be exclusively for men. Incorporated sewing elements are the needle and thread sign, scissors stamped on the background, scissors on the sign in the front as well as dress forms holding the capes for sale.

This post outlines the inspiration for the Hilda’s Haberdashery - mostly about the decorative sewing elements. While the next post shows the nitty gritty details on making the two-sided cardboard house including a free pattern specific for this two-sided paper house - the third in the series of miniature Halloween shops. See the Apothecary Halloween House and the Miniature Halloween Bookstore.

Hilda's Haberdashery is another Halloween-themed house because it is for the October Habitat for Humanity fundraiser. Now I'll go over how to make the decorative elements for this fun little cardboard house.

Starting with Tim Holtz Sizzix Mini Sewing Room dies, I made two dress forms to hold the capes. Whenever I make my little cardboard houses, I always think about longevity - what do I need to do to make the little houses and the elements last a long time? So each dress form was made with 2 layers of cardboard glued together. I cut out a smaller piece of the dress form base to help it stand better when glued down. Paint each dress form with a linen color and a darker brown for the wooden stand part. 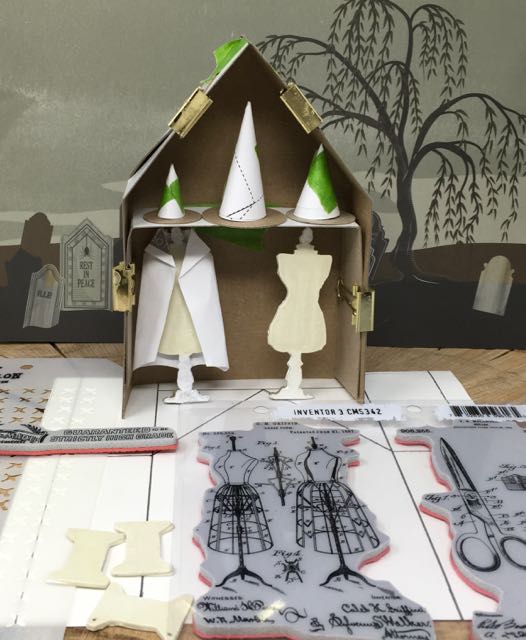 Sewing elements for Hilda's Haberdashery - dress forms, stamps for the background, spools for thread. Test fitting to see how everything will fit in the little house.

How to make the Spool, Needle and Thread Hanging Sign

Glue two layers of cardboard together for the spool. Punch a hole at the top for the jump rings to hang on the sign support. Wind black thread around the spool and glue down. Make a needle from metal tape covered card stock. Punch a hole so you can thread the needle. Smear glue along the thread for the needle to make it easier to manage and sturdier.

I used an eye pin from the jewelry aisle in the craft store to support the sign. It's bent into an L-shape to hold the sign in place with the bent part poking through to the inside of the house. I had to place a patch on the wallpaper to really get the glue to hold the wire in place. 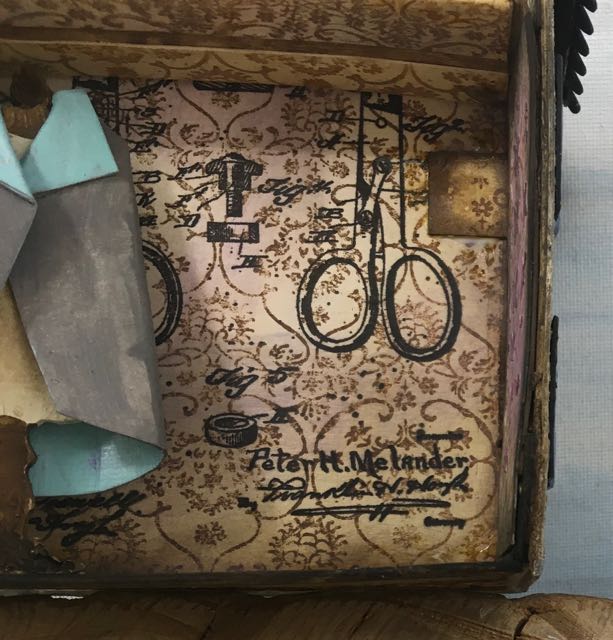 To keep the sign on the eye pin, I opened up the loop on the end of the eye pin and inserted the jump ring in the loop. I also inserted the thread from the needle through that same loop for extra holding power.

Cut a square from thin cardboard. There's a cape pattern found with the pattern for the little shop so you can get a better idea of how to make the cape. It needs to be relatively thin cardboard so it can be folded easily. Paint each side a different color so the lining will have a different color from the outside of the cape. Score the cape at an angle so it will drape around the dress form. I tested how to fold it with scrap paper first. Fold the top part of the cape back to make lapels because big lapels are in these days. Fold a bit of the shoulder back and glue down to make a better shoulder shape on the dress form. Glue to the dress form. 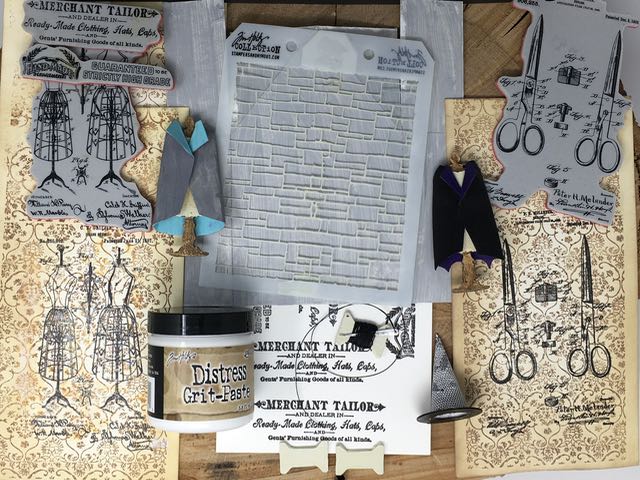 Background papers stamped for the Two-sided Halloween house. The grit paste and stencil in this photo were used on the front of the house.

Cut the background areas to fit the inside of the house, the shelves and the walls.

I wanted the witch hats stacked like on a shelf in a store. So I needed to make several hats. Each hat was made with about half a circle to form the cone of the hat and a smaller circle for the base of the hat. Roll the half circle to the size you want, glue it together and then glue to the circular base. If you stack the hats you need a hole in the middle so the hat below will fit in the hat above. 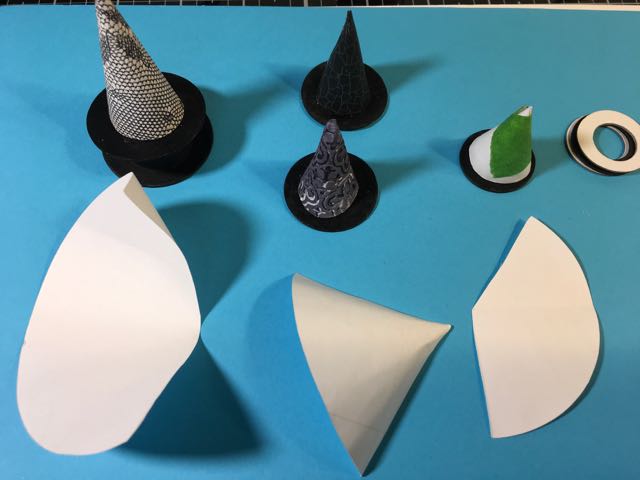 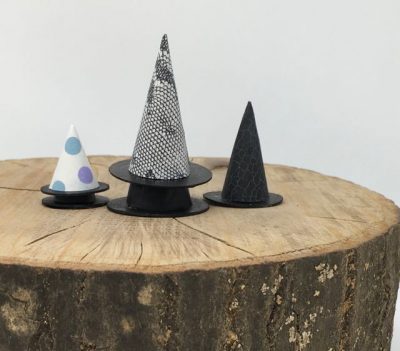 Make the hat shelf and the floor of the house

Figure out where your hats fit on the shelf. I did numerous test fits because I didn't want the witch hats too squashed on the miniature shelf. That made the shelf little lower than where the angle of the roof begin, but gave enough room for the dress forms below.

Glue the background papers in place 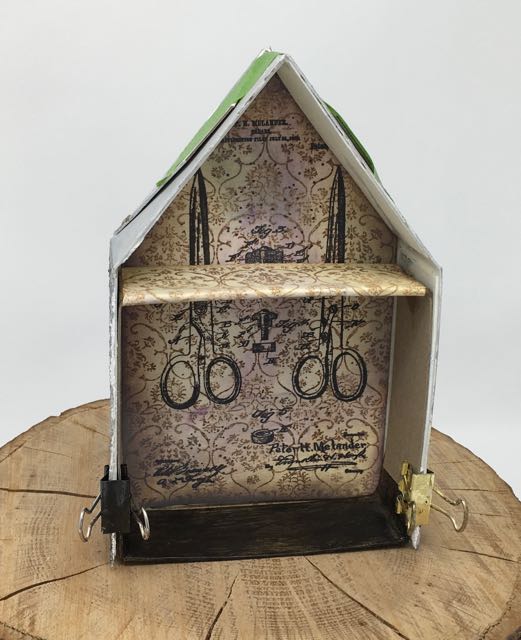 Decorate the Shelf and Floor and Glue in Place

Cover the shelf with the paper of choice. Or paint it if you like. Paint is easier and faster. Glue the floor in place at the same time so you can cover the inside walls with your wallpaper or paint.

Now adhere the Hats and Dress Forms in Place

I figured it would be easier to adhere the hats and dress forms in place before I glued the house to the base. So that's the next step. Let them dry completely before you glue the house to the base so you won't knock them out of place. I'm clumsy so I have to think of things like this. 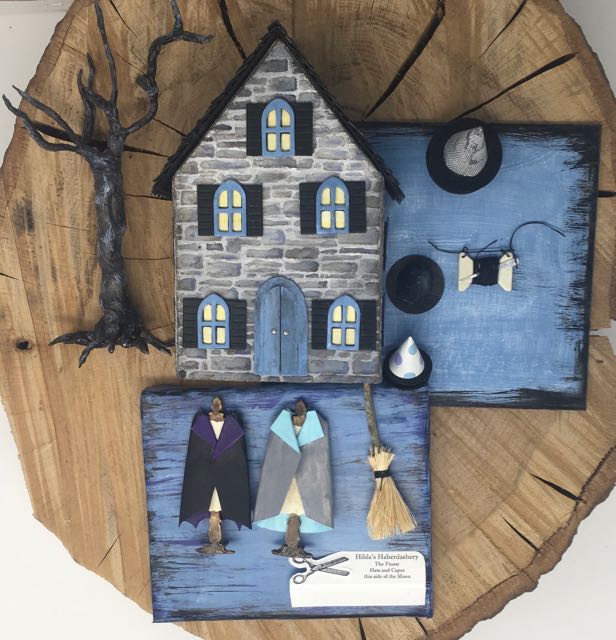 Planning all the elements to decorate Hilda's Haberdashery - the miniature Halloween hat and cape shop. You can see the bent eye pin that holds the needle and thread sign in this view. 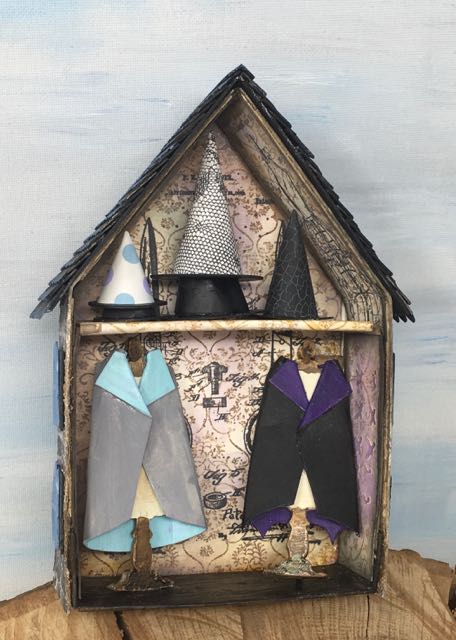 Make sure everything fits before the final placement. Fortunately, it does. 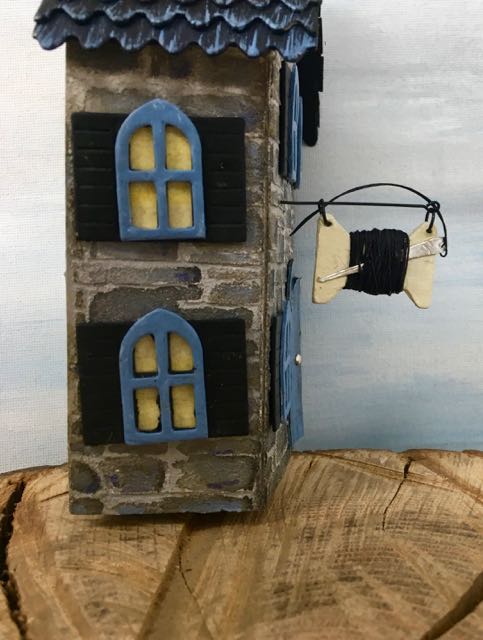 See the eye pin holding the needle and thread sign in place. The thread is inserted into the jump rings to make sure the spool doesn't fall off the eye pin. The windows on this side are a little crooked. Fortunately the twisted tree fits on this side. 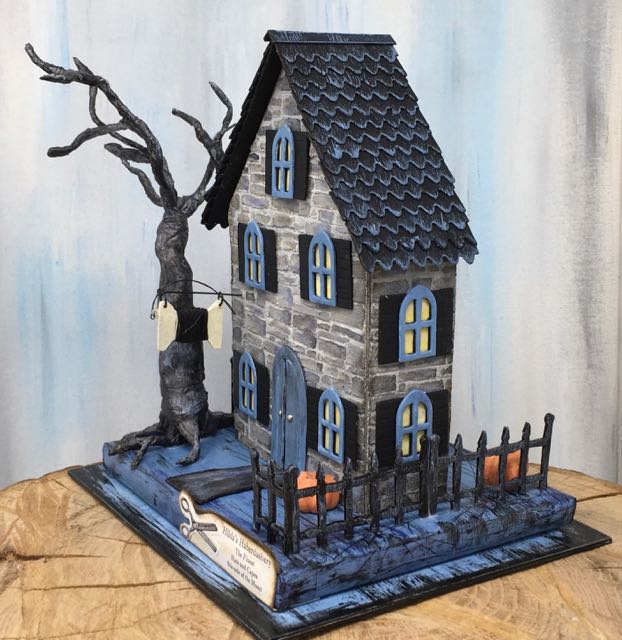 Front view of Hilda's Haberdashery showing the Needle and Thread Spool sign and the Haberdashery sign with the stamped scissors image.

There are so many options on how to make a similar Haberdashery shop. For example, you could use Tim Holtz vignette boxes or his Sizzix Tiny house die as the base for the shop or perhaps make a Halloween card using these decorative elements. Lots of design possibilities. I hope you have found some creative inspiration here. What do you think about the little shop? Of the three Halloween shops - the Apothecary, the Used Bookstore and the Haberdashery, I think this is my favorite.

Be sure to check out all the inspiration on the Frilly and Funkie blog as well. These designers are incredible. And then finally, if you want to remember where you saw this, be sure to pin it to your favorite Pinterest board. 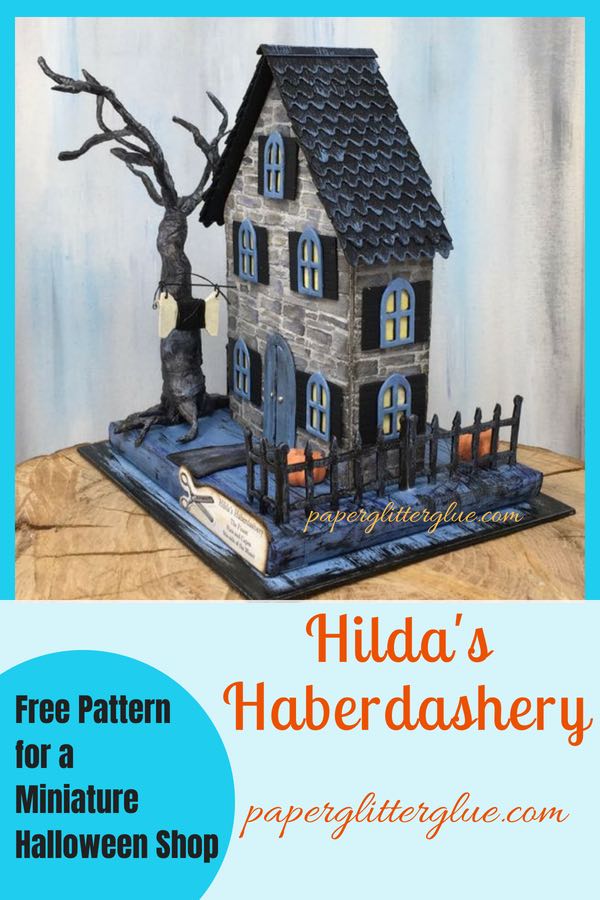 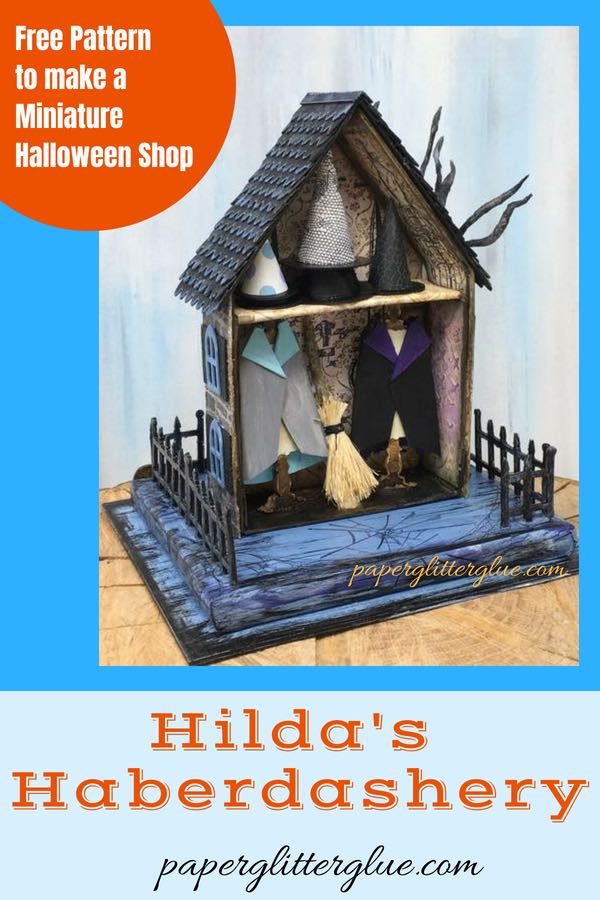