I just finished this clock house, my last for awhile I think. When I was looking at some of the blogs I routinely read, I noticed that the Wednesday Simon Says Stamp Challenge was for things with wings.
I was a little sad that my "Red, White and Bluebird Clock House" was posted a couple of days too early to be included in that challenge, but I had a backup plan. At the time I only had one thing with wings on this house, but after seeing the theme for the challenge I really decided to "wing it".

So I put bats on the sides of the house, on the wires through the chimney, on the tree, an owl on the tree and there are actually a few tiny birds on the tombstones behind the house though they are hard to see with my photography. This house is kind of like a "find it" children's book - how many winged things can you find? 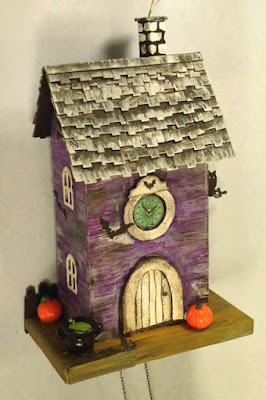 I made this house using the exact same simple gable house template that I used for Raven's Crest and the Red, White and Bluebird house. I was trying to be more adventuresome with colors so I used purple paint over my hand drawn random board paper. I didn't really like it. I kept painting over it. My intent was to make the house look like it was in a foggy mist - a difficult artistic concept in a capable artist's hands and not too successful in mine.

I used various dies and punches:

The owl and a few of the bats are from Tim Holtz Halloween die which is more commonly known as the trick or treater die.
The tree is also a Tim Holtz die called Branch Tree. I think it has been retired which makes me sad.
The tombstones are from a Martha Stewart edge punch which has long been retired.
My curious mice in the front are also a retired Martha Stewart edge punch.
Some of the bats are from an EK Success punch.
The windows are from one of the Village Dwelling dies - the church one I believe.
Once again, the roof is from the Tim Holtz Rooftop die. What did I ever do before that came out?

The door was cut freehand as you can probably tell. The pumpkins and the cauldron are made from sculpey clay. The bats are also made from clay, but I used a Martha Stewart silicone mold to make them. 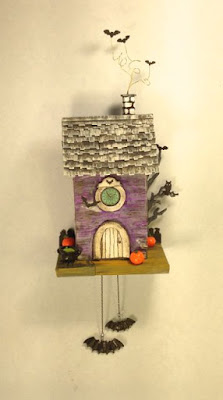 My plan is now to go back to more traditional houses after having explored the cuckoo clock for awhile. I also want to make some more houses in books. That offers a lot of creative possibilities.
All of these houses will be for sale at a fall fundraiser at the hospital where I work. That's why I am so intent on making lots of houses between now and September.