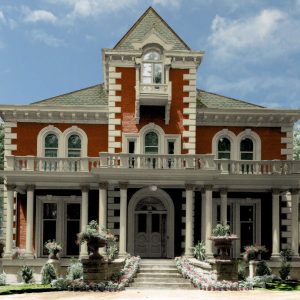 This year I'm going to make a spectacular little cardboard putz house for Habitat for Humanity's fundraiser in October. Last year I sold most of my Halloween houses myself, but one house was auctioned off. It raised $80 which was pretty good considering how small it was compared to the other luxurious items in the display. So my plan this year is to build a house that stands out among all the larger auction items.

My next house is based on an actual house in Greenville, SC called the Wilkins house. The property it stood on was sold to a developer who planned to tear the house down to build an assisted living facility. Greenville rallied and raised money to save the house by moving just around the corner. It is estimated that this 750-ton house is the largest house ever moved in SC. After the move, extensive restoration was done to return the house to its former glory (it had been serving as a mortuary) and list it on the National Register of Historic Places. It is unusual for a home that has been moved to be listed on the National Register but because of its superior design and restoration it was considered eligible and was accepted.

I figure this is the perfect house to make for 2018 Habitat for Humanity fundraiser. The design will be greatly simplified from the actual home while still trying to convey what is so wonderful about the Italianate design. I am making the home rectangular rather than square to compress its features somewhat.

Some of the design issues I've been wresting with are:

More on how the little cardboard version of the house is progressing in a couple of days. Oh, I forgot to say that I am going to make 2 versions of this house - one for Halloween and one for Christmas. They are going to be really cool and raise a lot of money for Habitat, I hope.

It's New Year's eve and I have to work in a little while which is one of the downsides of working in an emergency department. I hope you have a wonderful new year and that it brings you peace and joy.