There are several things that inspired this project. First, the Simon Says Stamp Monday Challenge is "Splash It On". Second, I wanted a project to use some of my new stamps and dies - specifically, Sea Life and City Scape. And then there are some specific recent projects that have been inspiring. 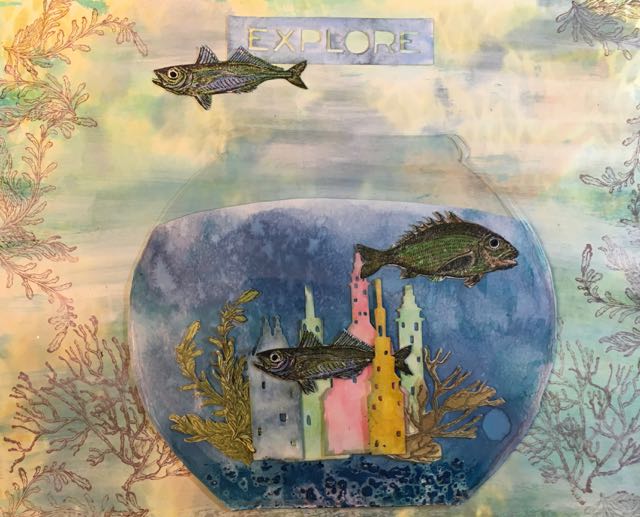 A couple of weeks ago the challenge on the Simon Says Stamp blog was "Make a Rainbow". A number of people used the Cityscape dies and colored them. I had always envisioned Cityscape as background pieces in grey and blacks. It had never occurred to me to make them in color. When I thought of that in the context of a water splashed piece, I thought about making them to look like the little buildings you see in the bottom of an aquarium. 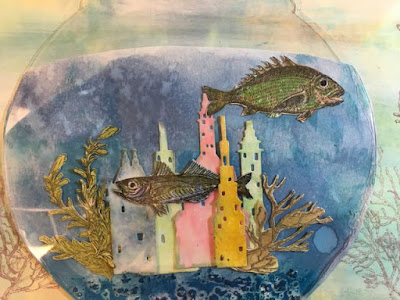 Barbara Schiassi of yayascrap.blogspot.com made an incredible project with Sea Life and Distress Oxides of fish in an aquarium. Truly inspirational. So I thought I would make one with a fish bowl. I cut out the shape of a fish bowl from a large piece of acetate. Then tinted it a very light blue with alcohol ink. The background was made with Distress Oxide inks and some Tumbled Glass distress ink as well. I stenciled some texture paste through a random stencil to make the rocks at the bottom of a fishbowl. The texture paste was colored with Broken China Distress crayon and smeared about. 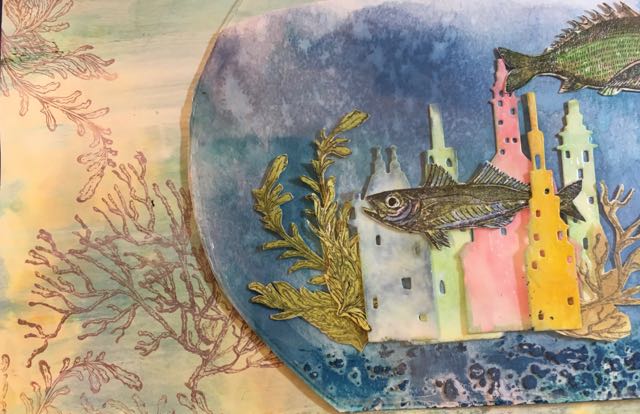 I cut out the buildings and colored them with various inks and then a layer of Glossy Accents to make them look like ceramic.

The fish and seaweed were stamped and colored. I fussy cut the fish and the seaweed. I also cut the background to the shape of the fishbowl. The elements were arranged on the watery background and glued down. I put the fish between the buildings so it would look like he was swimming through the underwater city.

I needed a background for the bowl so I used the distress oxides again, but I thought they were too bright to contrast with the water in the fishbowl so I did a light gesso whitewash. I stamped more seaweed on the side in brown ink. I needed something else so I cut out the word "Explore" with another fish who escaped the fishbowl.

I am so glad I finally thought of a project to use Sea Life. These stamps are incredible.

Next up - I've made 2 non-house projects so it's time for another house. I'm going to make a spooky one next.

I will be sharing this with the Simon Says Stamp Monday Challenge - "Splash It On".

Thank you for stopping by.