I just got my Halloween 2017 Tim Holtz Stamper's Anonymous stamps. I love them. I planned on making some houses on my days off, but instead I got wrapped up in a Halloween stamping frenzy. It probably doesn't come as a surprise, but I did a framed perspective piece. I think it looks pretty cool, but of course, I would do some things differently if I were to make it again. 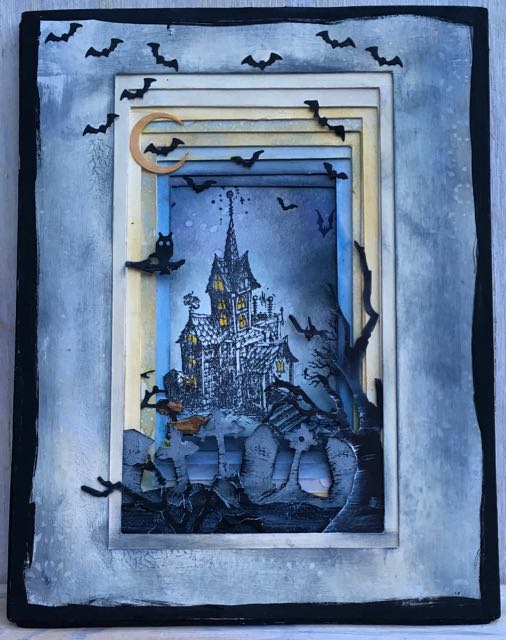 I keep experimenting with the frames, making them longer, narrower, sometimes just extending the length. I only had ½ inch between each frame so that's ¼ inch on each side. It didn't give me much space to put my Halloween elements. Also I only extended the width on every other piece. I don't know if that worked or not. It was hard to cut the rectangles close to the same size.

I do like how long and narrow it is. The Distress Oxides formed my color palette again. I think the chalky effect looks very good with this house. I used watercolor paper for the background of the house. I distressed it using Iced Spruce, Faded Jeans and some Black Soot distress oxides and some water spritzing. The house is stamped on the watercolor paper with black ink. The windows were colored with a distress pen in Fossilized Amber. I stamped a bat in the upper right corner and the spooky tree just off the edge the right as well.

Close-up of the House. The buzzard stamp is on the left.

The grumpy buzzard stamp was stamped and cut out. I adhered it on the second layer of frames. I added him later in the process. He really needs more plain space behind him to show up better. I decorated the sky with bats I had cut long ago. The owl on a branch is from the Halloween shadows strip die. I don't have this year's Sizzix dies yet (which have a really cool owl die). They have been ordered though.

You can see I used the graveyard die again. I just love this die. And the branch tree. Mustn't forget the branch tree.
I edged the entire piece in black because the edges of the under layers don't line up as well as they did on my previous pieces. It's supposed to function as a kind of funky frame.
Just a fun piece playing with stamps and distress stuff and cardboard and glue. It was a good day for Halloween crafting. 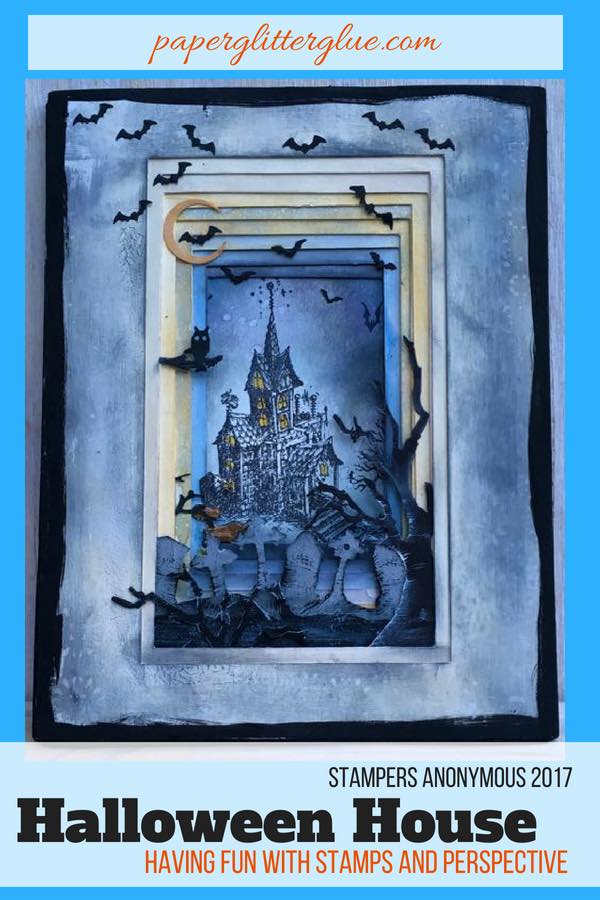