This week's Simon Says Stamp Monday Challenge is called "Pets Corner". I had just the idea for it - using the Crazy Dogs series by Tim Holtz. Of course, I had to make a house as well - a dog house this time. 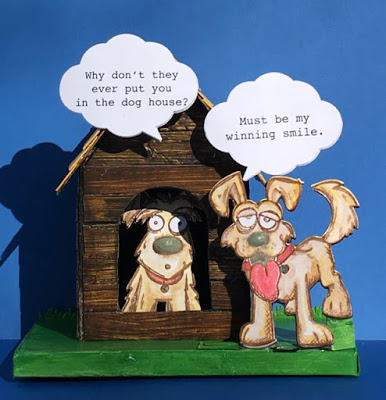 I made a very simple gable house pattern which is versatile and will be used on other houses which you will see soon. I covered it with cardboard that I had painted to look like old wood and cut out the dog house front. I made simple yellow shingles by cutting some cardboard.

I stamped 2 doggies from the Tim Holtz Crazy Dogs series - one for inside the house and one outside. It finally occurred to me that the dog in the house looked like he didn't want to be there and the dog outside the house felt like he was free and clear and would never be in the dog house. I made some word bubbles conveying these thoughts. 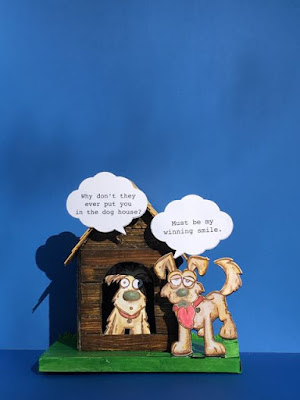 For me, this was a relatively simple project which took less than a week. I've been making another house from the same pattern at the same time. The decor on it is more elaborate, however. I'm going to post it on a few different challenges. I might get it done today, but probably tomorrow.