I am progressing on my most recent putz house. I've almost got it done.

Here are some progress photos. 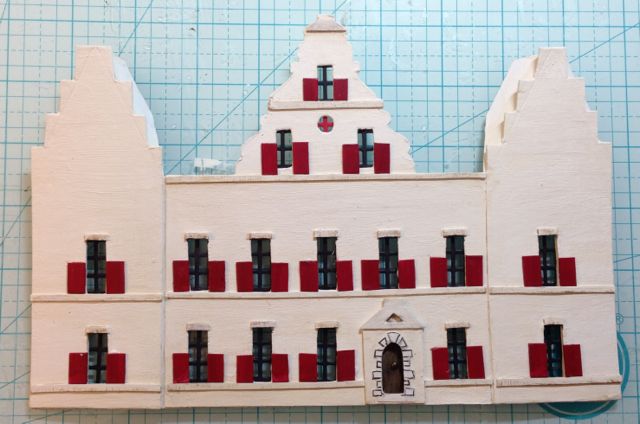 This is the front of the building. As you can see I decided to add red shutters to both the first and second floor windows. The current building does not have shutters on the first floor though it probably did in the past. I just love the pop of red. I think it makes the building look so festive - like Christmas in any season. I also antiqued the trim around the windows a little bit with Ground Espresso distress paint. I don't know if that looks dirty or if it gives it more dimension. I really can't decide. I was going to draw in some random bricks like in the Petersham's illustration, but I think that would add unnecessary detail. I may try in on the stepped gable sides where it wouldn't be too obtrusive. I can always paint over it.

I made a door that opens to put a light source inside the building. I think it looks pretty good. I'm going to cut out some clip art and put it on the inside of the door. 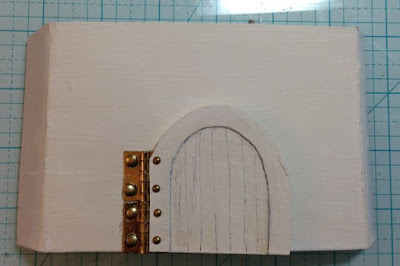 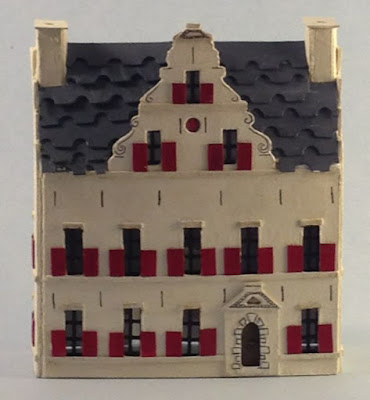 Here is a quick photo of the house as it stands. Some stuff drives me crazy, but overall I think it looks pretty good. I'm kind of sloppy painter so there are some globs of paint on the building. I didn't line up the roof shingles as I should have. Some of the white on the roof is glue drying so that problem will be solved. The chimneys are a little too wide proportionally. I made about 3 different ones before I settled on this one. Still it should have been maybe an ⅛ of an inch narrower. I don't know what the black lines are on the building, but they break up the white space so I decided to add them. Now I have to add the building date on the front 1582 and add one coat of arms. There are supposed to be 6 windows with 2 coat of arms above the windows, but I miscounted because I didn't count the door. Crazy. Anyway 5 works very nicely though.

So that is my Middelburg Zeeland Sint Joris Doelen Guild House in the Netherlands. I am working on the base tonight. There is a brick-paved walkway or square in front of the house which I will try to replicate in some fashion. The real house abuts 2 other buildings, but I'm going to make it a free-standing building with the fence of some sort.