You know I love to make books, even if they are kind of wonky. This book is definitely a little wonky, but still pretty fun to make and the inside looks cool even if the outside looks funny. 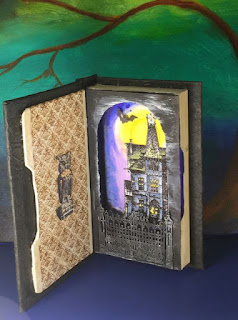 Here are some photos of previous books I've made:

So I just got a new phone for my bike trip and of course I had to buy a sturdy phone protector. Well, wouldn't you know it, the box the phone protector came in looked like a book to me. 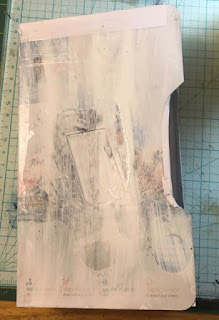 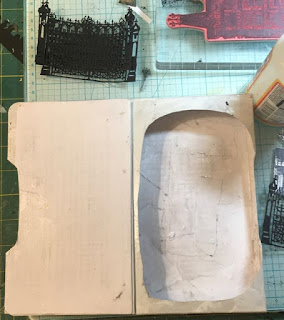 I had been planning to make a diorama or something with one of the new Tim Holtz stamps - the Manor stamp which is so beautiful and detailed, so I decided to make a book instead. The challenge with making a book is making it so that it opens. I can do it, but that's where the wonkiness is most apparent. You will witness that in just a moment. I also wanted to make something for the Creative Carte Blanche challenge this month which is "Sun, Moon, and/or Stars". I've done a couple of challenges that involved celestial bodies so all I did was submit my most recent halloween house with a moon stuck in the back. This time I wanted to make something where the moon (the celestial body in this case) was a more integral part of the design.

Here it is - I'm calling this project the Rook's Book because Spellbinders called this embossing folder - The Noble Rook. A Rook is a sociable bird in the crow family that has grayish-white face which is supposedly easily distinguished from a crow though I find that hard to believe.

I recently took the Tim Holtz' Summer of Creative Chemistry classes and decided to use some of the techniques I learned about - sort of. Mostly I embraced his major point which is experiment with your materials. As a result the background used Distress Crayons, inks, stains, sprays, paints - a little of everything.

I stained and embossed the house almost exactly as Kim Mathura described in her tutorial because I think the way she did the Manor looks so incredible.

I cut out 4 layers of the gate, glued them together and then glued them in front of the house. The gate is also highlighted with a black shimmer wax so it would stick out a little better. I used a bat suspended on a string for a little movement in the sky.

The inner cover is new Tim Holtz stamp what makes a lovely background to the owl stamp. It looks like old wallpaper to me. I will be using that stamp over and over.

Well, that's it for now. I hope to post some details on making some of the Haunted Holtzville houses in a day or two.

Have fun and be safe with the scissors.