I've been meaning to post a tutorial on making a cardboard house for awhile. The single best forum on the web for building cardboard houses is the Cardboard Christmas forum. There is a wealth of information there for making cardboard houses. But even so, sometimes you need a tutorial that walks you through the details. I'll try to provide some of those details from my last Halloween house - the Widow's Walk house.

First, here is a pinterest sketch that I found that was the inspiration for the house.

It's an appropriately scary house for halloween, don't you think? So then I did my own sketch on the back of an envelope of a simpler Halloween house. 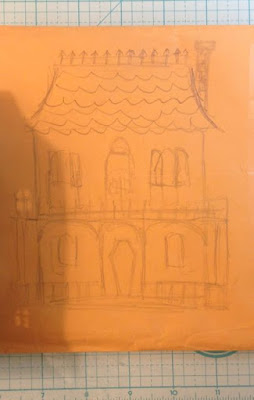 Now some people draw very detailed precise sketches, but I do not. The house evolves as you go along and I knew that would happen. I mainly just needed an idea of proportions to make the pattern.

I like my little houses to sit on a base that is 5-7 inches long and about 4-5 inches wide. It's easy to make a cardboard base that size. And it's a nice size for display - people can find room for a house that size. 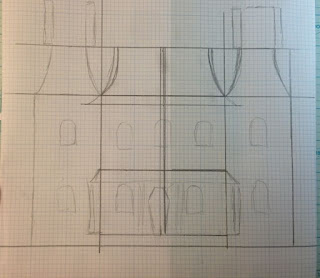 This is enough of a pattern to make a house with. Again, I am not really precise about window placement - at least not on my halloween houses. They are allowed to be wonky. I would be more precise on a Christmas house though. This pattern just gives me the front and the sides. I copy the pattern onto cardstock and cut out the middle piece to make the pattern for the back of the house.

I did make a PDF version of the pattern to show measurements and score lines for anyone who is interested. I think I have done it right so you can download it if you want. Most of the dotted lines are score lines. The exception is the dotted line that runs horizontally across the house. That is the functional middle of the house. I always move the door up about a quarter of an inch because if you cut the door directly at the bottom it weakens the structure substantially. You can even see that on many little cardboard houses on the web. Tim Holtz' Village Dwelling has the door elevated a little bit for strength as well.

The flaps at the top are to give more substance to the roof and to keep the house square. That is one major thing I learned from making houses from Howard Lamey's patterns. And actually on the Widow's Walk house I made I even included a flap on the top center roof to reinforce this roof even more.

Below is the cut out cardboard front and sides. You can see the score lines pretty easily here. I made the windows with a combined circle and square die that I use on my arbor press from Harbor Freight tools. It makes cutting out windows and doors so much easier than doing it with an exacto knife. Probably the most accomplished maker of little glitter houses is Howard Lamey and he hand cuts all of his windows and doors. I just don't have the skill or patience. I did cut out the coffin door by hand. That was easy. You can see where I cut out a window in the wrong place on the right and had to glue the piece back in place. It won't be noticeable because I glued a patterned paper on top. 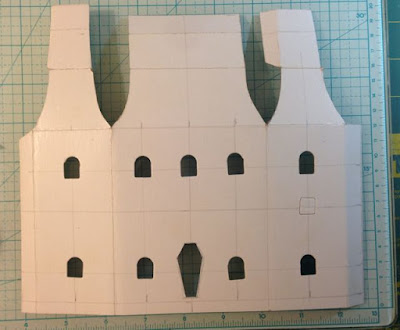 Here is a pdf of the random board template that I drew. I can glue that onto any house without having to draw the boards again. It prints on 8.5 x 11 paper and is about 5 inches high which is about as tall as any of my houses are.


More details on part 2 of the Halloween Cardboard House tutorial.

Addendum - Somehow I think I deleted this from my posts when I was trying to write another tutorial. It was originally published (I think) in August 2016.