0shares
Here is the house as it is about to be glued together. It is much easier to add the siding at this point, but it does leave a seam at the corners. That can be covered up by a corner board as it is on a real house or left the way it is. Usually I leave it black on my Halloween houses for the creepy factor. Since this house is pretty tall, when I glue it, I put a clip on the bottom making sure that the edges line up, but I can’t do that on the top so I use the green 3M painter’s tape to hold the sides firmly together. It removes easily but holds well enough to make sure there is a good seal. 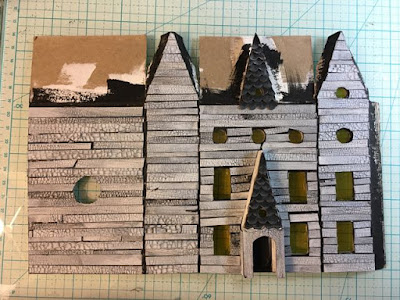 This is the roof with the cut out for the gable. I extended the cut out a little bit to let light into the tiny window on the gable, otherwise you could just make the angular cut at the bottom to let the roof overhang around the gable. You wouldn’t need the V-shape above it for light. I also cut a V-shape out the roof support – the under roof – for the same reason. 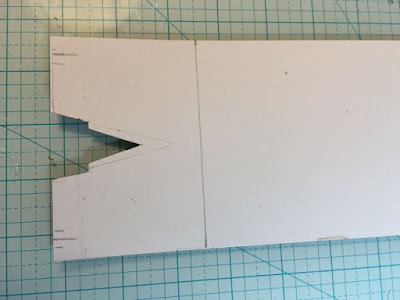 The photo below shows dry fitting the pieces to make sure the overhangs of the roof are the same on both sides (doesn’t really usually happen) and that the chimney fits snugly next to the roof and to see how it looks on the base. I also used the Tim Holtz Village Manor windows on the larger windows. These are some of my very favorite windows, absolutely perfect for a Halloween house. The smaller ones are from a Papertrey Ink die, I think.

The other photo shows the chimney better. I usually use a white Sharpie to draw the lines of the mortar between the bricks, but I painted these because I thought I could make the lines smaller. That worked. I distressed it after painting with Ranger Black Soot paint because I didn’t want it to stand out too much since it is such a tall chimney. When I painted the chimney I mixed it with sand to make a rougher texture. 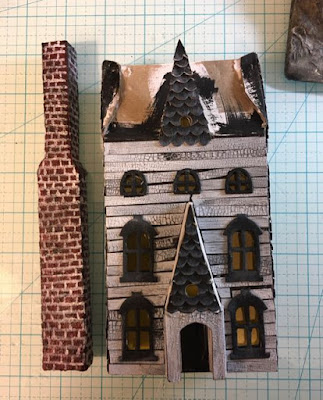 This is the underside of the roof. I try to remember to paint the overhang edges so they aren’t the color of cardboard when I glue it down. Sometimes I forget and then I have to paint after the roof is glued on which is difficult. Better to remember before. Sometimes I use a contrasting color like on the Stone House where I used ochre, but here I used the leftover sandy paint from the chimney.

The other photo shows the gable roof cutout. These are always a little difficult. When I first started making them I would try to recreate the angle on the front of the gable, but that is not the angle you have to match. It’s the slant of the roof that you have to recreate. Maybe it’s intuitive to you, but it wasn’t for me at first. 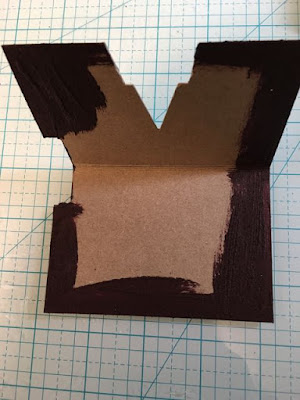 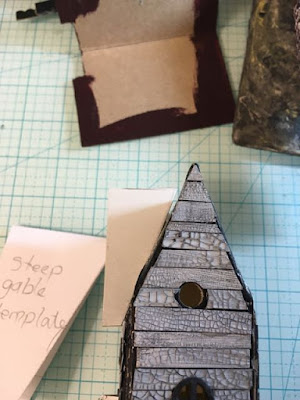 I have to remember to paint the underside of both gable roofs as well. I’m also going to do something different here. Usually I glue the shingles on when the gable has already been glued to the roof and it is a pain, measuring each angled piece then gluing it on and hold it in place until the glue sets. I am going to glue the shingles on while the piece is flat. I think it will be easier and cleaner. Then I will apply the roof shingles after the gable is glued in place.

That’s today’s progress. The house itself is almost done. Decor comes after that.

Ya’ll have a good day. Thank you for stopping by. Lucy