Last time I used the Tim Holtz Sea Life stamps I made a Fish bowl to contain them. This time I wanted to participate in two online challenges - Simon Says Stamp "It's a Frame Up" and the PaperArtsy Challenge "Assemblages" so I had to come up with a project that fit both. I saw a shadowbox online done by a French artist, Chloe Remiat, that was simple and beautifully executed that it made me think I could use the Sea Life stamps in a similar manner. It turns out it wasn't easy, but I still had fun making the project. 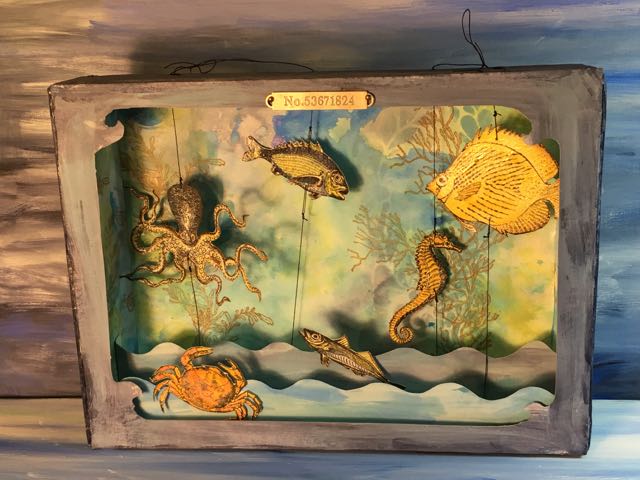 I did not take photos of the steps along the way because truthfully, I was in a hurry. The Simon Says Stamp challenges last only a week and the Paper Artsy Challenges are for two weeks. It is difficult for me to make anything in a week's time. Also I am in the middle of the "The Count Awaits" House.
I used a Fancy Feast canned cat food box as the basic structure. I covered the inside with distressed and stenciled and stamped watercolor paper trying to mimic the undersea ocean. I stamped all the sea creatures from Tim Holtz's Sea Life set, but I also stamped the Butterfly fish from Designs by Ryn. I was going to have bubbles floating by all some of the animals, but it was hard enough to suspend the sea creatures without adding bubbles.
The frame itself is another saved piece of cardboard from work which I distressed, cut out the center and glued on top of the Fancy Feast box. The thread is just black buttonhole thread punched through the box top and bottom and tied. That was a little hard because if the pieces were really free floating, not touching the box, they all would flip to the back side. Why does that happen? You'd think I'd have a 50% chance for one of them to float face forward. I actually glued the tail of the Butterfly fish to the side of the box so she wouldn't go all wonky.
I decided to think of the thread as strings like on a puppet rather than trying to disguise it.
So again, I am sharing this project with Simon Says Stamp "It's a Frame Up" based on the box frame containing the sea creatures.
The design team assemblages on the Paper Artsy blog are so wonderful that they are a little intimidating. My project is not nearly as imaginative, but it's a start. When I first started doing this paper crafting, most of my projects (except for the little houses) were pinterest failures, but I am getting better.