Sometimes I just can't manage to find an online craft challenge that matches what I want to make - which is, most often, little houses.  But I found one on the PaperArtsy blog - the challenge is Blue and Ochre. Both of them happen to be some of my favorite colors to paint with. I love all the gradations of blue and have come to love one blue color in particular even though it is supposed to be grey - the misnamed "Payne's Grey". Ochre - well,  I just love to find places to put it. It's a perfect color for Halloween houses. 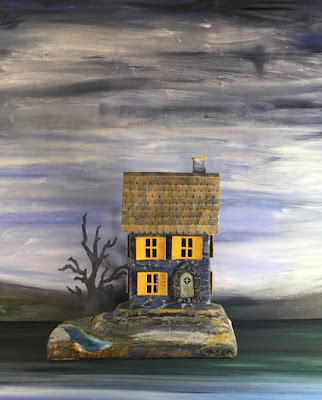 This house is called the Bluestone Creek House for obvious reasons. You have to name the houses like you name feral cats, by how they look. Hence, the feral cat who has lived in my yard for more than 10 years and still won't let me pet him, but eagerly eats my food is named Blackie though now he has a few white hairs in his old age. The houses are the same way - you have to use descriptive names or you will never remember them. 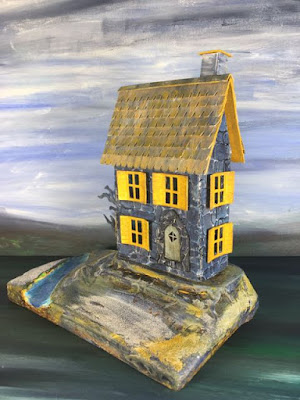 This is the first time I've made a water feature for one of my houses. I built up layers of corrugated cardboard for the base as always, but I cut a curved area for the creek, painted it with shades of blue and then painted several layers of Rangers Glossy Accents to make the water. I dammed up each end with painters tape so there would be some depth to the creek. 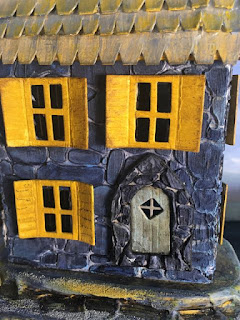 The stone work is made by using the Tim Holtz Layering Stencil called "Stones" and texture paste. Great stencil. I will be using it often.

Whoops! Forgot to put in a front step. I will remember to do that. I tried to make the door archway more prominent, but I painted them the same color. Next time I will make 2-3 layers of cardboard to make the archway stand out better. Always learning. I hand cut the shingles rather than use the Village Rooftop die because I wanted them to be less symmetrical and more wonky, but really it's not much different from using the Village Rooftop die. 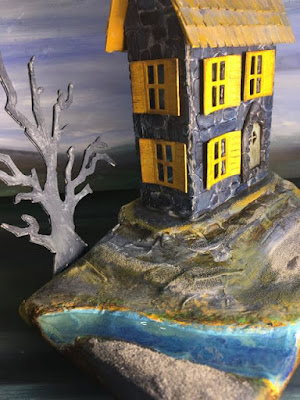 You can see the creek a little better in this view. Right now the tree looks a little forlorn, but I may put a fence behind it that will tie it into the landscape better. 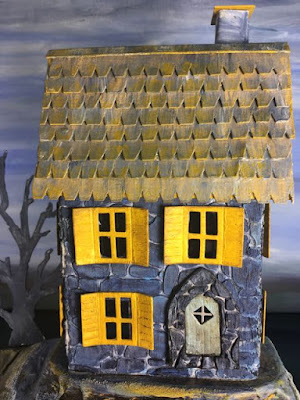 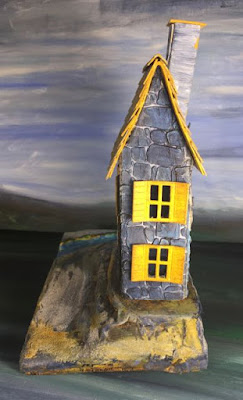 Now the tilt problem with the chimney is caused by 2 things. Often when I glue on a roof, it tends to sag a little in the middle which pitches the chimney back. The other problem is that I used a chimney that really belongs on another house pattern where the roof angle is not so steep. That also tilts it backwards. I have some things I obsess about, but this is not one of them. 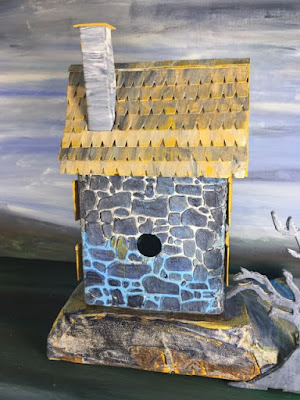 There were a couple of problems with the back of the house. If I hadn't spilled paint on the back, the grout on the back was perfect, much better than on the front. Again, this did not awaken by obsessive tendencies because it is in the BACK. And I got ochre on one of the stones when I was gluing something down on the house.

I will eventually decorate this house for Halloween with pumpkins, bats, black cats, and other seasonal items, but not now while I am entering a specific challenge.

Go to the PaperArtsy blog and see the beautiful designs for the Blue and Ochre challenge. They are really wonderful.

« Violets on the Roof
Another Stone house - 3 Gables, Rusty Roof »