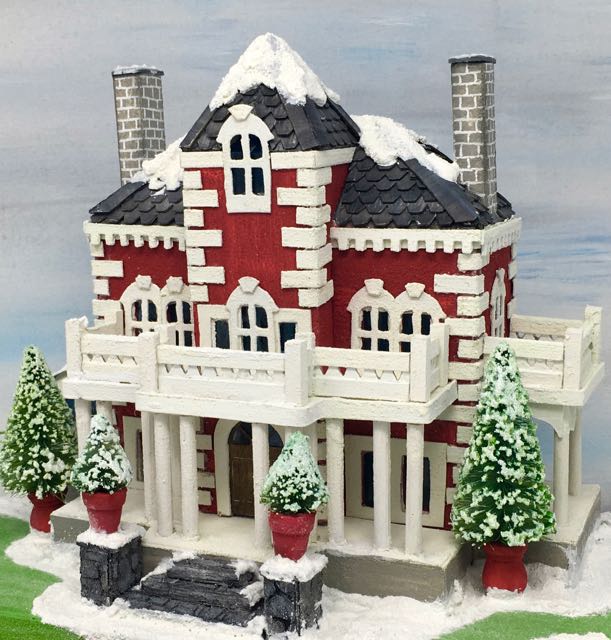 Wilkins house - a Christmas Putz House made for Habitat for Humanity

The Wilkins House is a grand Italianate mansion in Greenville, South Carolina that was built in the 1870s. It was scheduled for demolition when a developer bought the property for an assisted living center. My hometown rallied and saved the house. In September 2014, the house became famous for being the heaviest building structure ever moved in the state of South Carolina when it was saved from destruction. You can read more about the move from this Greenville Online article.

This Christmas Putz house is to be auctioned as a fundraiser for my local chapter of Habitat for Humanity. Today I delivered my Putz version of the Wilkins house to Habitat of Greenville to be auctioned off on Monday evening. I hope it raises a lot of the money for Habitat. 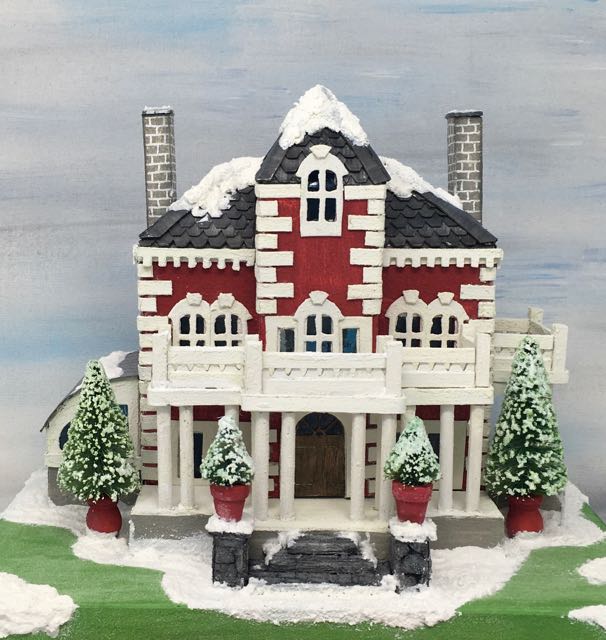 To make the house, I made 7 prototypes before I felt like I captured the broad shape of the house. Below you see several photos of the house after restoration followed old photos showing the original design and setting of the house. 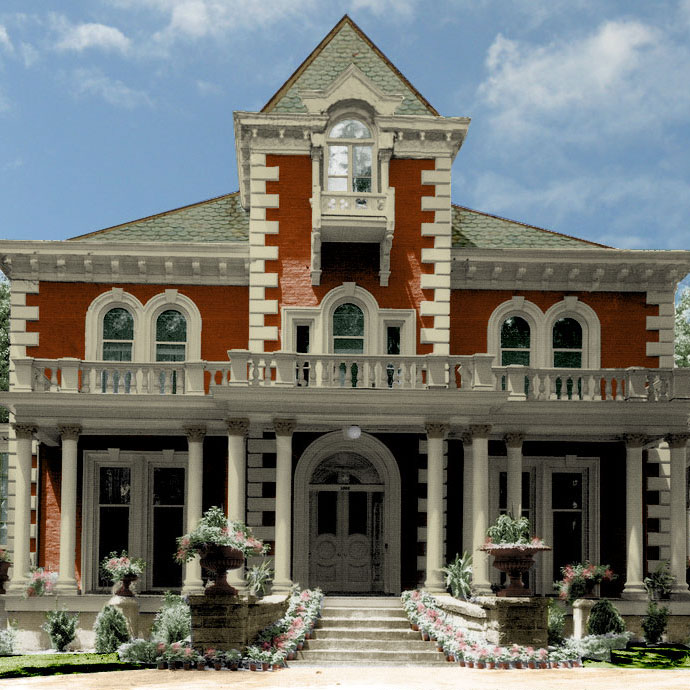 Front view of the Wilkins house after restoration. 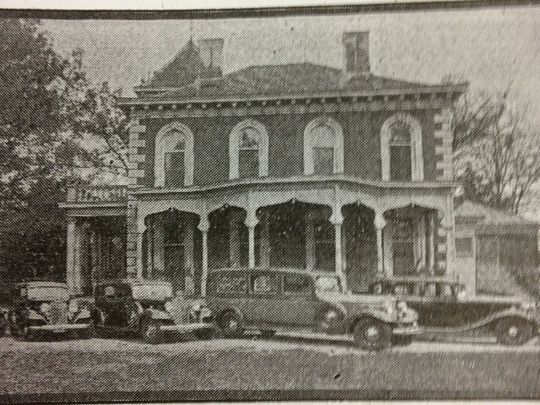 Old newspaper photo of the Wilkins house before it was leased to be a funeral home. Just to give you an idea, this is the side view of the house. You can see how broad the design is. 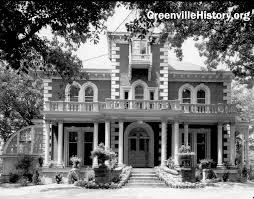 Old photo of the Wilkins Houses from the 1930s. I couldn't find a larger version. This photo was originally found on GreenvilleHistory.org website. 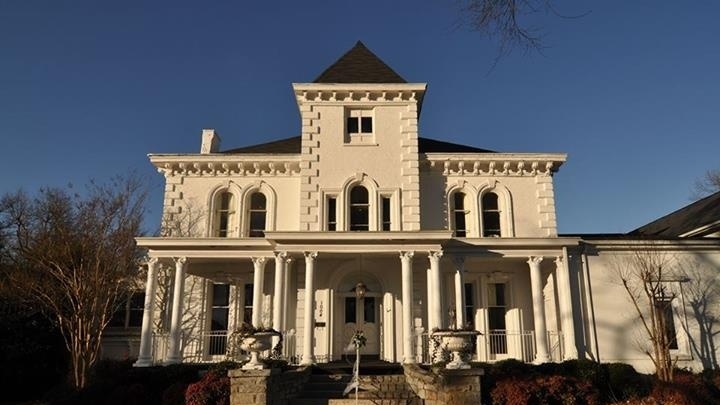 Overview of the Cardboard Pieces for the Wilkins House

First, here is an overview of ALL of the pieces of the house just to give you an idea of what went into the making of the little cardboard version of the house. 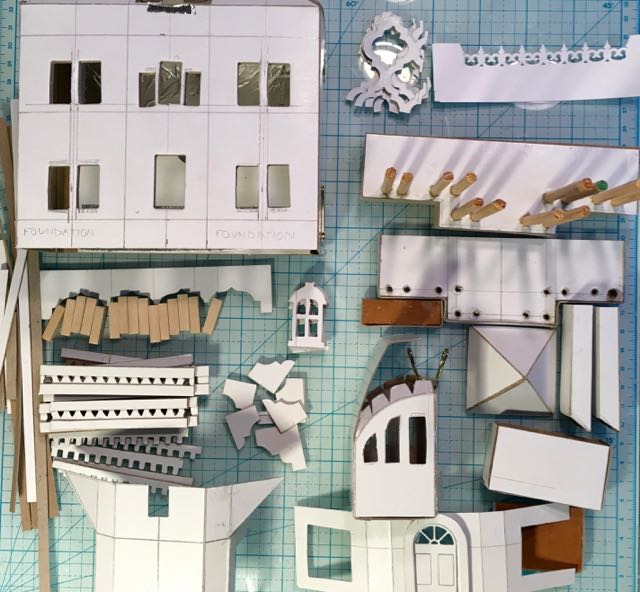 Lots of trim, other structural pieces that need to be primed and painted for the miniature Italianate mansion 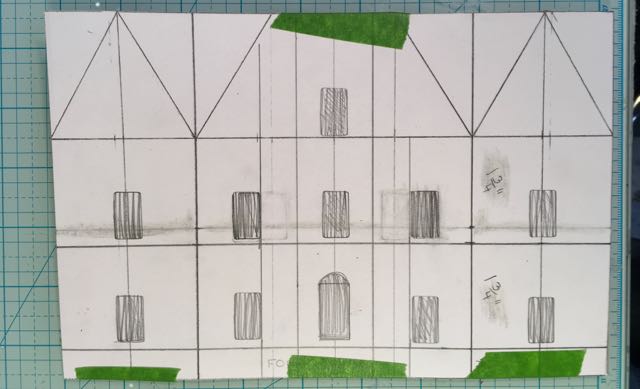 One of the early prototypes - too tall, not broad enough 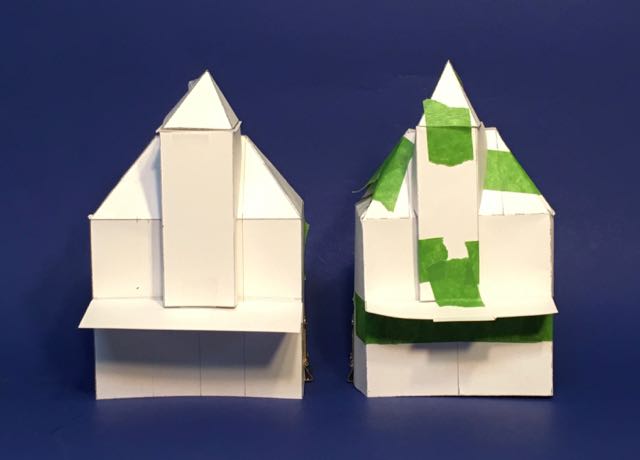 Multiple prototypes made to test out the shape of the Wilkins House.

The prototype on the left has a squattier shape with a shallower steeple. Overall, it's approaching the right shape for the house, but not quite there. Mostly I had to widen the base of the house to get it right.

The Porch - the most difficult part of the house

By far, I found the porch to be the most difficult area to construct. I made several prototypes of the porch before I could get it to work. Truthfully, I should say "porches" plural because the side porch wasn't exactly easy either. And that's with me omitting the tiny porch over the conservatory and the funny window extension at the top of the front tower. 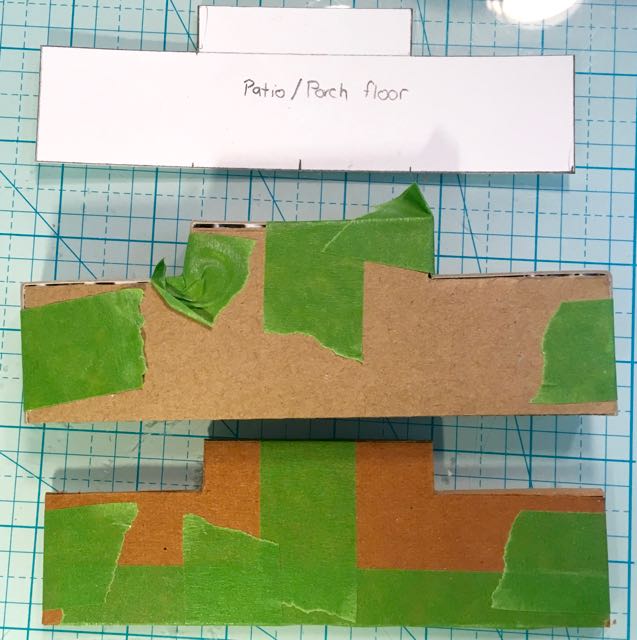 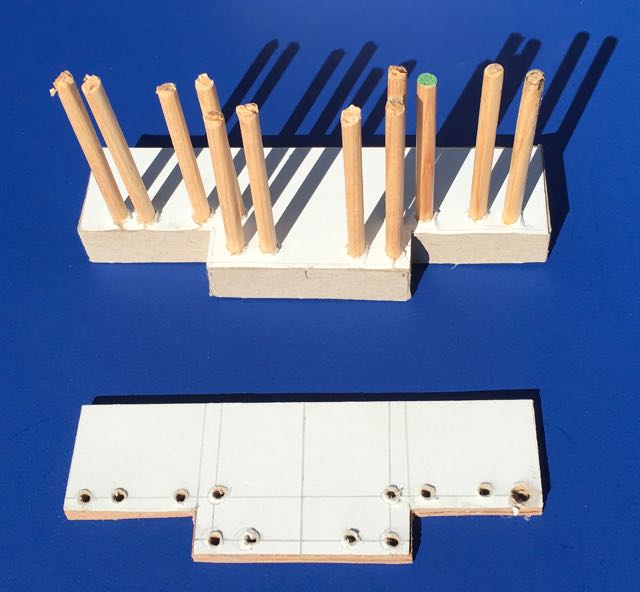 Also, the railing challenged me A LOT.

Finally I got the porch railings pretty even.

Conservatory Pattern for the Wilkins House 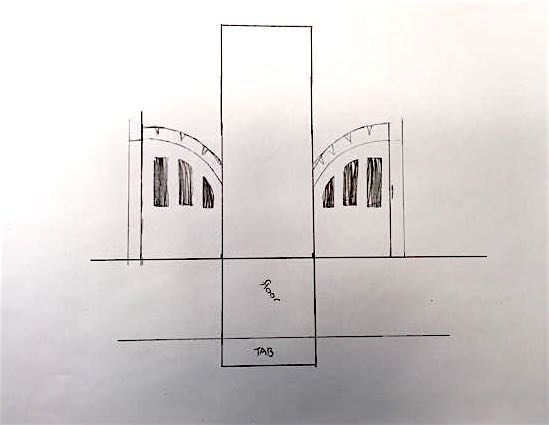 Here's the conservatory pattern for the Wilkins House 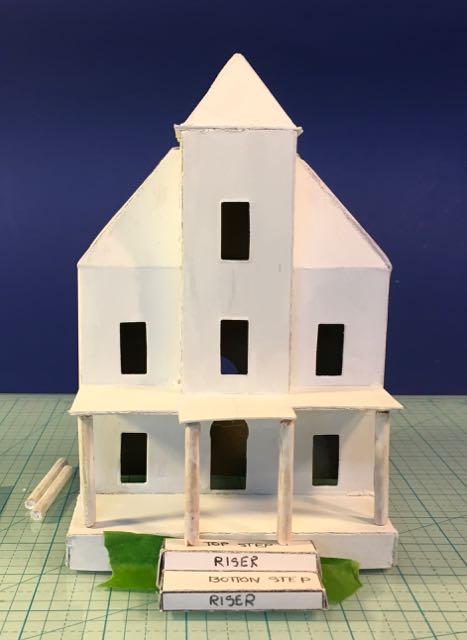 Working on the stairs for a prototype 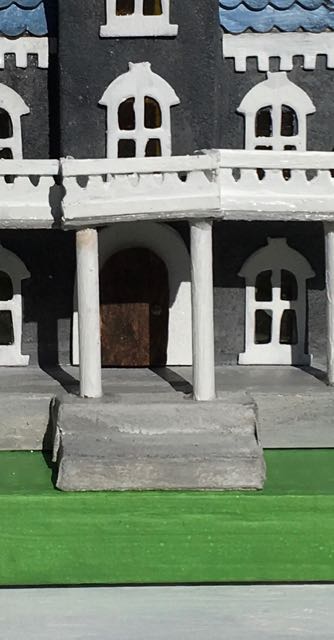 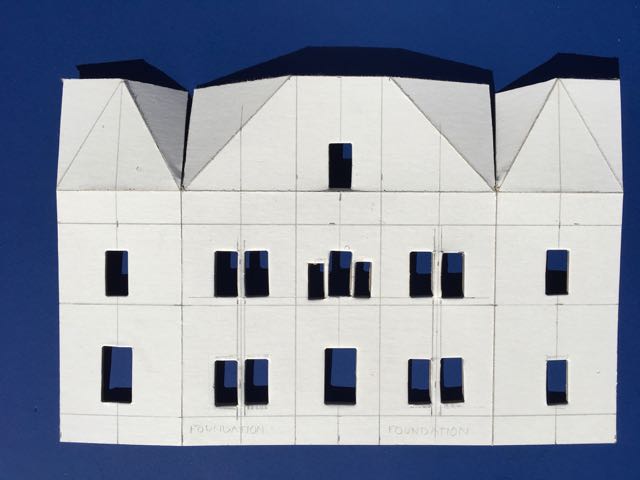 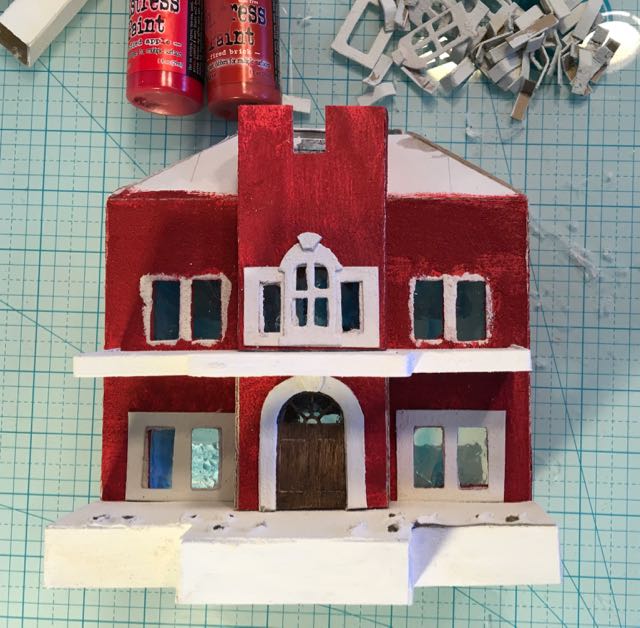 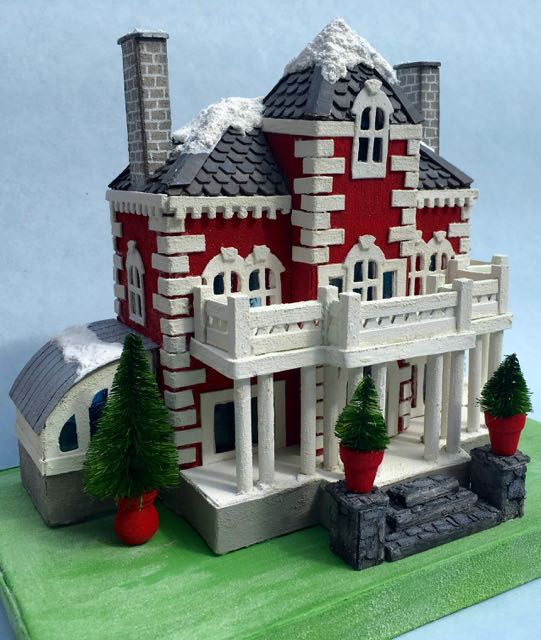 Conservatory side of the Wilkins House shows the stairs as well. 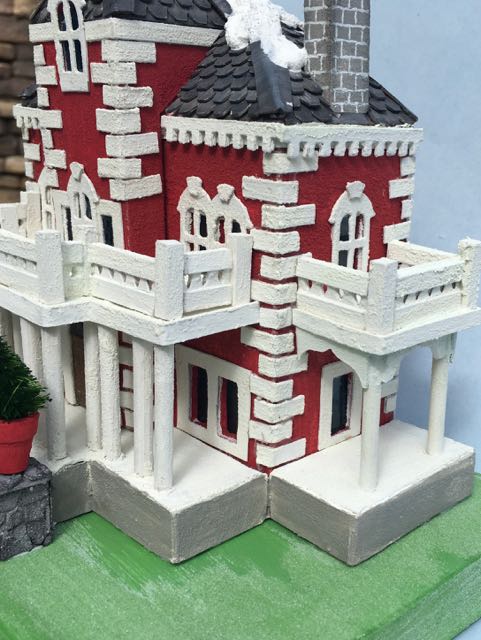 Right side porch view of the putz house 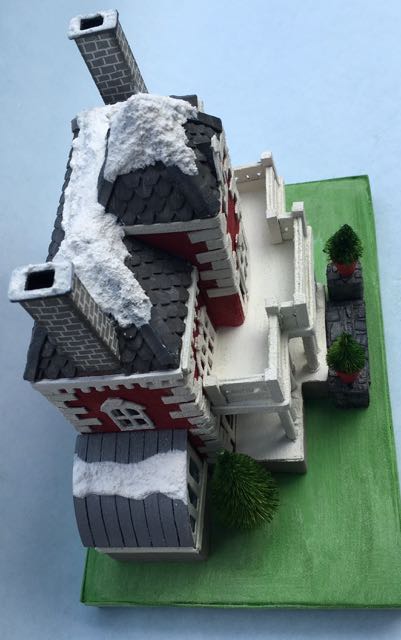 Bird's eye view of the house. Before I delivered the house to Habitat, I added much more snow. 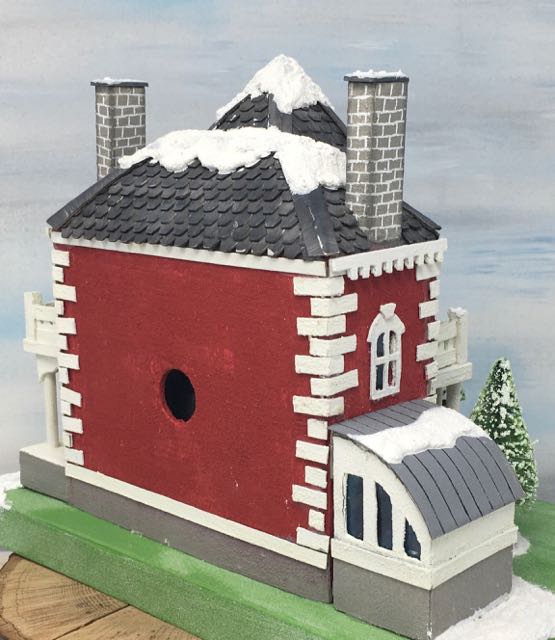 Back view of the little cardboard Christmas house showing the Conservatory

So that's it - the Wilkins Cardboard Christmas house. Easily (easily??) the most difficult house I've ever built. Monday is auction day where we will find out how much money it brings in. After it sells, I'll let you know how much money it raised.

Here is an earlier paperglitterglue.com blogpost about choosing this particular house for Habitat. You can read about the Habitat of Greenville fundraiser and auction here.

That's about it for now. Thank you for reading.

P.S. Is there a paper pattern available?

No, I wouldn't do that to you. Actually, I wouldn't even do it to me. But I did make a much simpler pattern which I call the Front Tower Clockhouse pattern which you can download from the Paper Glitter Glue library if you subscribe to my crafty newsletter. One example made with this pattern is the Haunted Schoolhouse. Another is Kelly's Christmas Clockhouse which is almost exactly the same pattern, except I made the tower slightly taller and the house slightly shorter on the pattern. 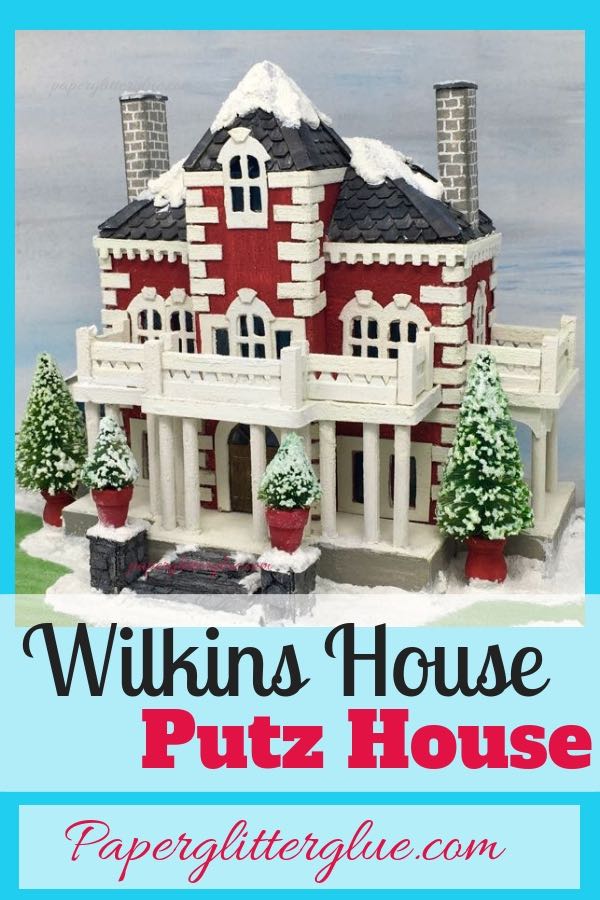 Want to remember where you saw this glitter house? Pin to your favorite Pinterest board