I like the pattern for the Davenport house so much that I made another one. This one is called the Lady Davenport’s Halloween House. The surface is made using a different stone stencil technique from the one I used on the Irish Stone Cottage. It consists of sanded paint stenciled with a stone pattern in a light color and each individual stone painted with different colors.

Below I’ll describe some of the steps to create this Halloween House.

Lady Davenport uses the same pattern as that of the Davenport Green house. The porch is constructed a little differently otherwise the house is the same. I hope to develop a simplified version of pattern for this house in the future. I will let you know when I get it done.

I used the same stencil (Tim Holtz Mini-Layering Stencil #28) as on the Irish Stone Cottage, just in a different way. The stones on certain areas have more distinct borders than others. I believe this is because some areas have more heavily sanded paint and were rougher. It was more difficult to stencil these areas. Overall, I still like effect very much. To me, it looks like old stonework that has eroded over time.

Construction of the Lady Davenport House

The house is constructed exactly like the Davenport Green house. The basic structure of the house consists of the front and 2 curved gable sides. The back piece has tabs on each side that are glued just inside the side gables. After that glue dries, then the front gable extension is added to the right side.

The windows are from my very favorite Tim Holtz house window from the Village Manor die. I just think they are perfect for these Halloween houses. The little windows on the sides of the front addition were cut out by hand. I don’t have a die for them. The front picture window was also hand cut – very unusual for me. This window has a surprise inside which I will show you in another post.

The curved main roof functions as an under roof as well because shingles cover the entire roof. It gives the house structural support as well. Always paint the overhang so it won’t be just naked cardboard visible under the edges of the roof. I curve the roof by gently bending it with my thumbs, just do a little at a time to make it fit the curve of the gables.

I chose these two views because you need to know what I did wrong so you can avoid these problems on your own 3D paper houses. The tops of each of these rooflines have a strip of scalloped trim and I did not glue them on correctly. On the front gable the left side is much higher than the right. When I applied the glue it was correct, but then I turned my head or got distracted and the trim slid down and the glue had already set before I knew it.

A similar problem occurred on the trim on the back of the house – I glued the trim to the top row of the shingles and as the glue dried the trim leaned to the front of the house.

My typical response to these construction errors is that it’s a Halloween house and perfection doesn’t matter, wonky is ok for a Halloween house. That might be true, but it’s not the way I intend to construct my little houses. Just thought I would be honest about my mistakes. And here is my attempt to correct the worst mistake on the front gable. I added a little crown to the front of the gable.

Below you can see how the house itself is not exactly square and that the gable is glued on crooked. I think I scored the sides wrong so that the left side is not equal to the right side. These mistakes bother me a little bit, but not a lot because the structure of the house as a whole looks ok.

Now add the base

My cardboard base is made just like the one in this post on how you add LED tea lights to the base. I chose these neutral blues and grey colors for the base because I just think it works for this particular house.

Fence for the Lady’s House

The fence is a modified version of Tim Holtz Thinlit die – Gothic Gate. I cut those extra sections off to improve the proportion for this particular house.

My opinion about the fencing is that it really completes the house and functions as a frame for the house. I think it also shows up better because of the lighter neutral colors in the base.

Happily, I have TWO online challenges I can enter this little paper Putz house in – both are Simon Says Stamp challenges and both are “Stencil It” for their Monday and Wednesday challenge. Since the fundamental decorative element of the house is a stencil, I am able to submit this project. I love these challenges.

I hope you enjoyed reading about this paper house project. What do you think of the Lady’s house? Would you like a pattern of this house? The roof curves are challenging, but I have an idea on how to make them easier. As always, I make these mistakes so you don’t have to.

Thank you for reading. I hope to see again soon. 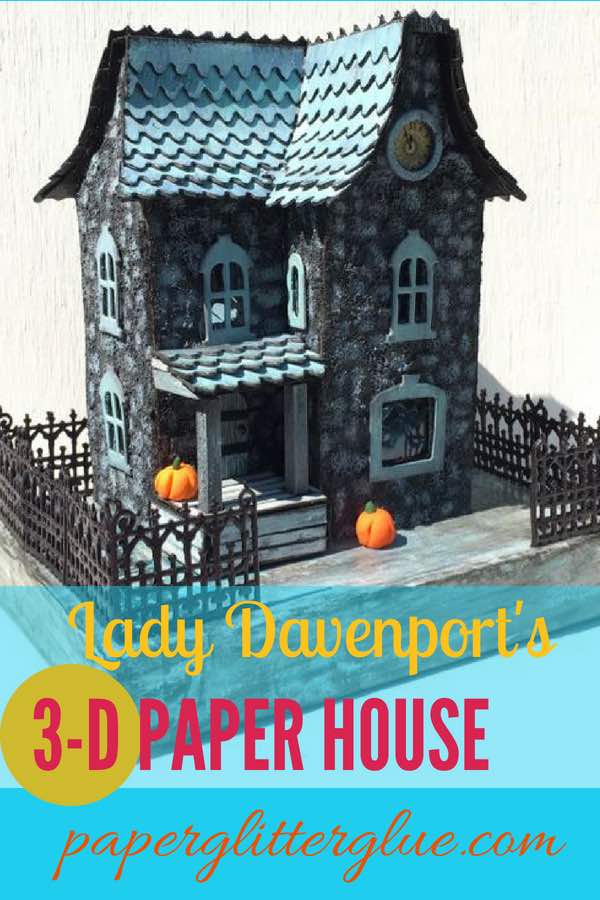 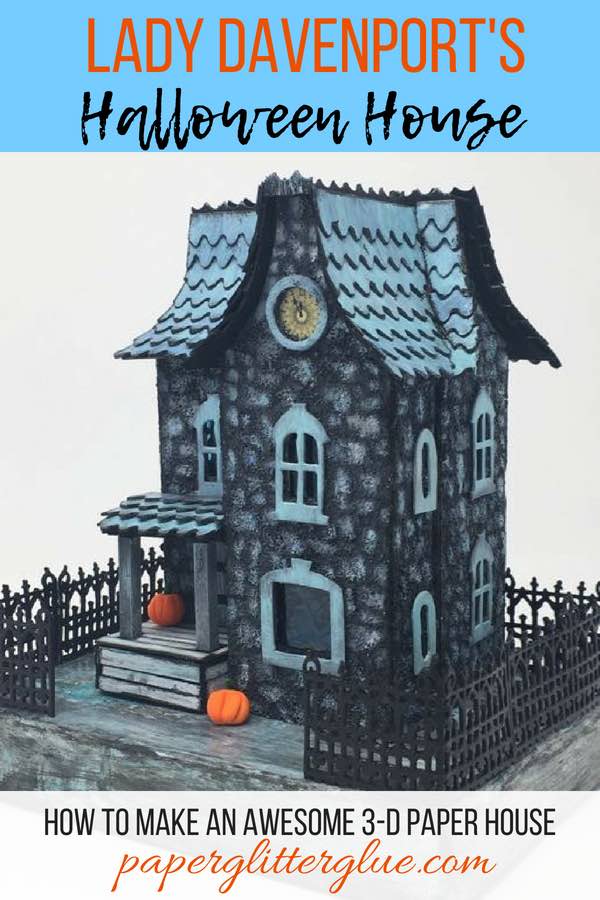