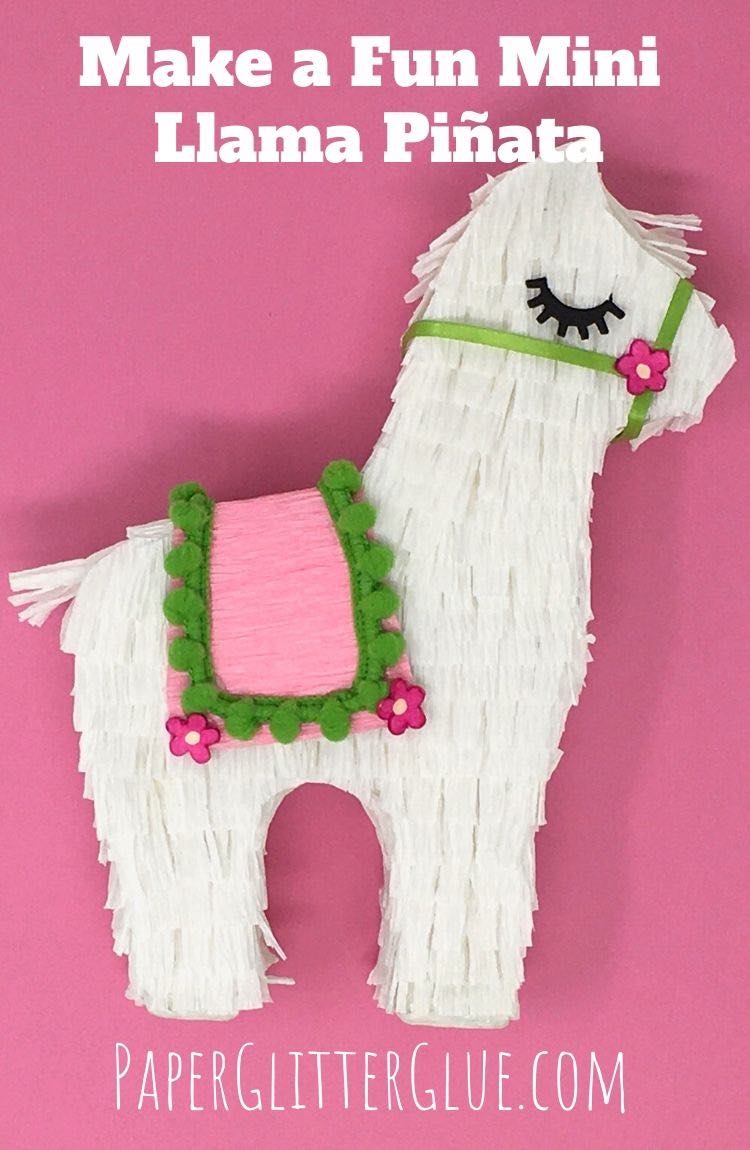 Have you seen all the cute piñata variations on Pinterest or Google? I just love to see all the different shapes and kinds of piñatas that I find online. When I see paper projects like this, I try to figure out how I can make them. I've always done that since I was a little girl. Well, the mini llama piñatas have captured my imagination and I figured out the best way to make one (or several) for Cinco de Mayo or for a Fiesta party as mini treat holders or even as party decor.

As much as I like these piñatas I don't make them to bust open. For me, I put too much work into making them to tear them apart. So I usually make a trapdoor that you can open to insert some candy or a surprise or a message without messing up the cute little animal.

It's not difficult at all to make, but it does take a little bit of time mostly to cover the cardboard llama with fringe. Initially I was going to make a bunch of mini llama piñatas to give to my coworkers, but I ran out of time. I only have 2 done rather than 14. I might end up giving them out on Thursday, Nueve de Mayo instead of Cinco de Mayo.

You don't have to spend hardly anything to make this DIY Mini Llama Piñata because you most likely have all these materials readily at hand. And the pattern is free in my library so you can get started right away. 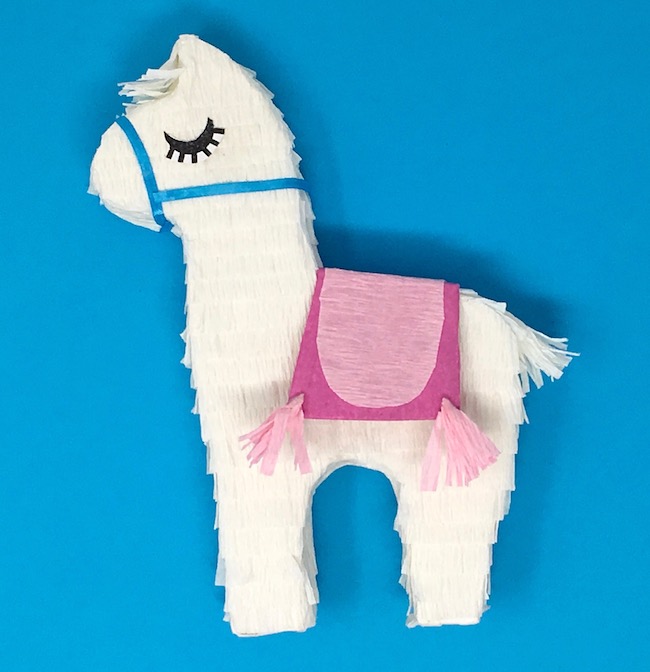 First download the pattern from my Paper Glitter Glue library. The file is Design No. 52 in the May 2019 section of the library. It is saved as a zip file - a compressed file.

So when you download it, you have to "unzip" it or uncompress it to get the file. Check out these instructions for unzipping a file.

Now you can see the PDF printable file and the SVG cut files for your automatic cutting machine.

Subscribe below to get these free files for the Mini Llama Piñata if you haven't already subscribed to my newsletter.

There are two  8.5 x 11 inch pages for the main pattern. The first page has the miniature llama templates and the saddle. I make most of my patterns in this size because that is the size cardboard I have in abundance recycled from work.

I've made a short video (11 minutes) on how to make your own Mini Llama Piñata. It's at the bottom of the post.

Cut out the llama pattern

Next cut out the pattern. Fortunately, the pattern is pretty simple so if you don't have an automatic cutting machine like a Cricut or a Silhouette, you can still cut it out pretty easily. 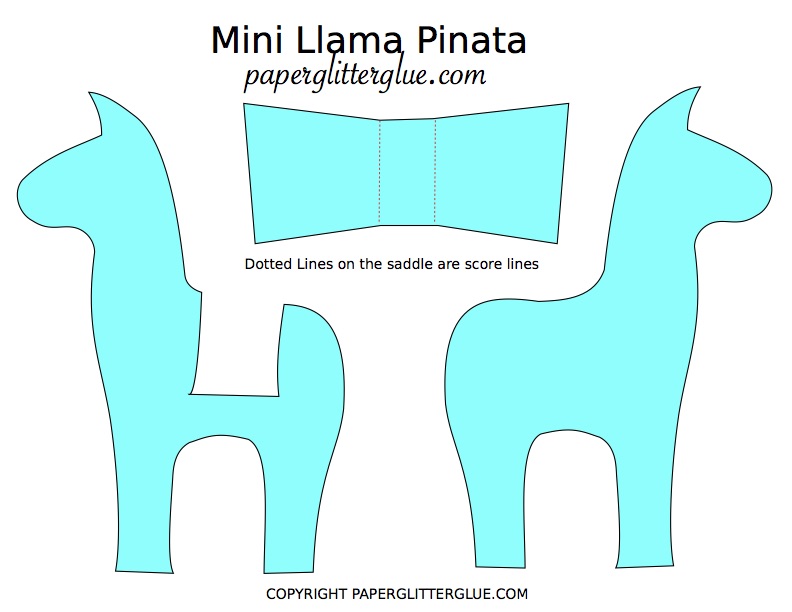 On the second page there are 3 edge strips and 4 eyelashes. I cut the eyelashes out by hand, but I think you can cut them with the "Print and Cut" feature on a Cricut. You may wonder why there are 4 eyelashes on the page. Well, that is because I tend to misplace little pieces of paper after I cut them out so in my files I try to include extras.

Tape the llama cardboard pieces together with masking tape

I tried to make it very easy for you to make the little llamas by adding tabs on the outside of the pattern, but this is what happened. 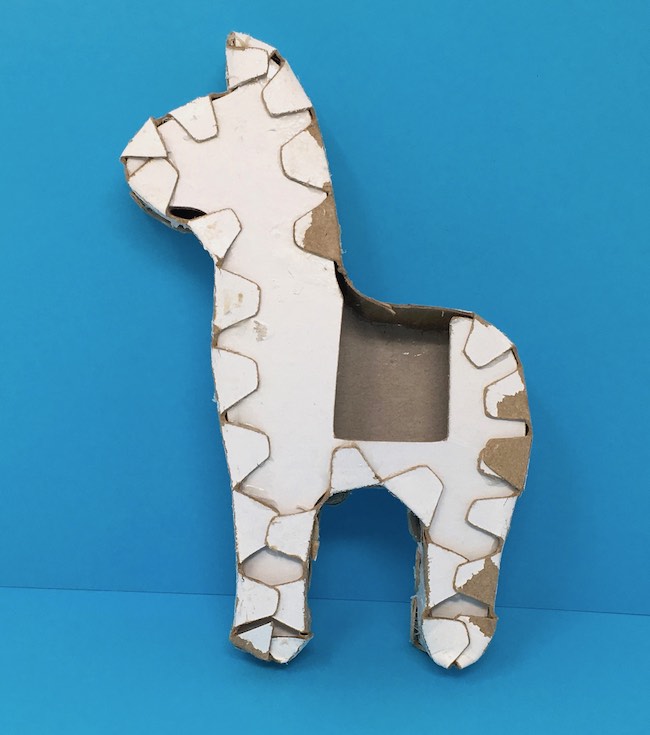 It's a crafter's fail. It must have taken me more than 30 minutes to glue down all those tabs. Crazy.

Second attempt was better using a paper mache technique, but it's still kind of awkward because the glued-on torn strips of paper don't stick immediately so it is hard to get the edge piece to curve with the shape of the llama. 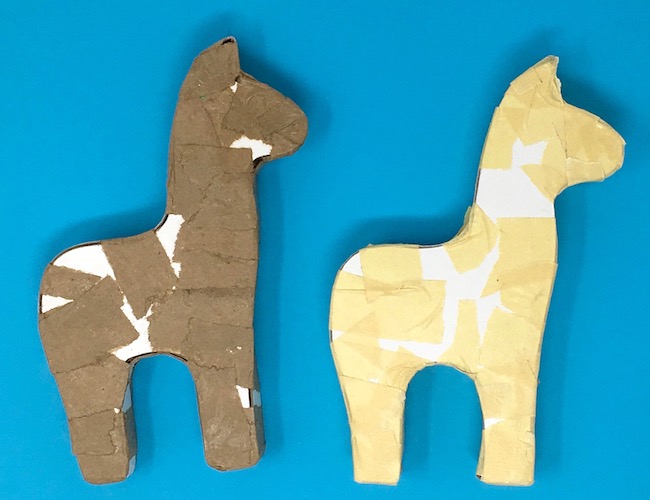 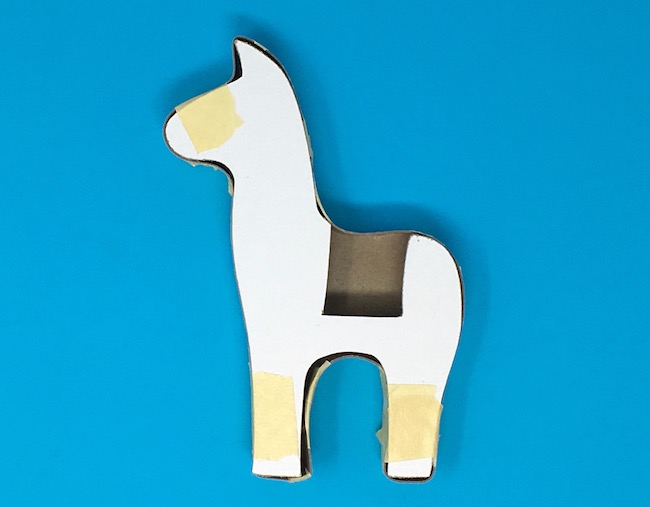 After you have cut out the two sides of the llama, so now tape the long piece of edging to the back piece with masking tape. The back piece is stronger than the front piece which has the saddle cut out so that's why you use it FIRST as the base of the piñata.

To make the edge piece flexible enough to go around all the curves, pull it through your fingers. You need just over 2 pieces to go all around the llama. All of those pieces are on the second page of the pattern template with the eyelashes.

Now paint your little llama with primer so the masking tape won't show through the white crepe paper fringe.

Cut out fringe from tissue paper or crepe paper 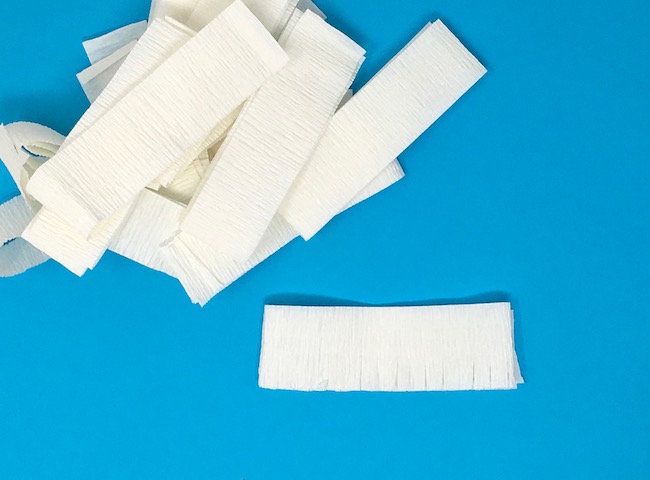 Glue fringe to the cardboard mini llama starting at the bottom 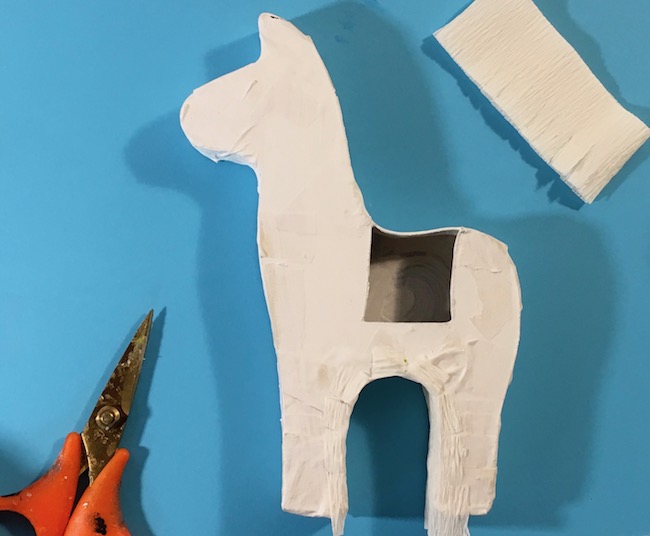 So there is no one perfect way to glue on the fringe. You can't mess it up because it's supposed to be fringy. One time I just started at the bottom of the legs and worked my way up on the front. And the other time, I added the fringe to the edge and then to each side. It really doesn't matter much. But do only one side at a time. Otherwise it's a gluey mess. 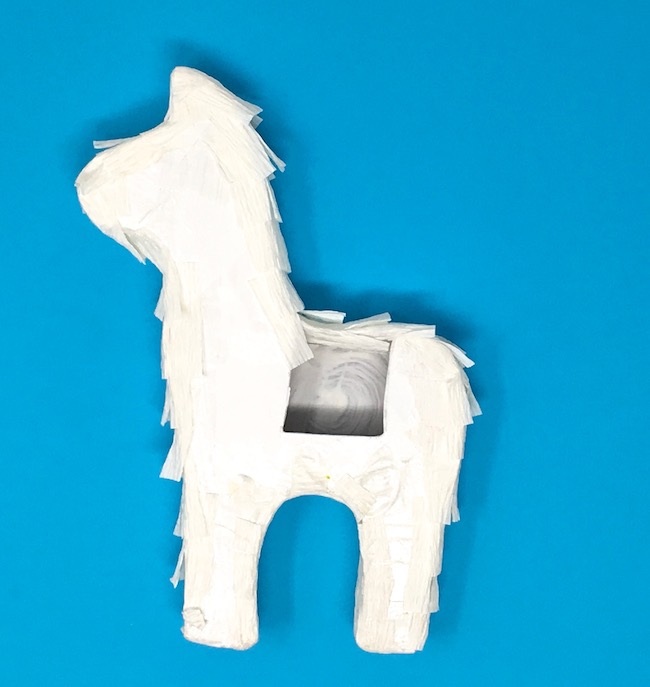 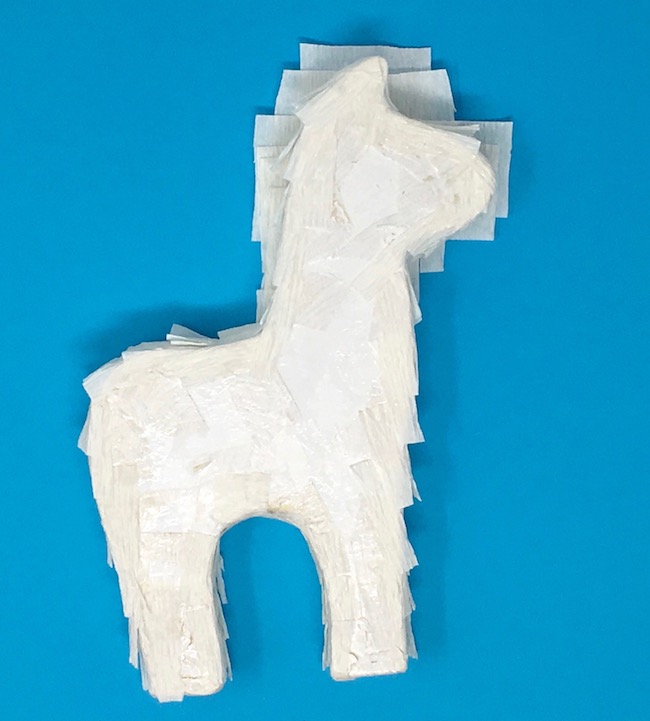 Also I made a little tassel for the tail and a bit of fringe to go on the llama's forehead. When you look at photos of llamas, they have these funny furry poofs on the top of their foreheads. It adds to their endearing charm so I added it to my little DIY cardboard piñata llamas.

Glue the decorated saddle onto the mini llama piñata

After the miniature llama is covered with fringe it's time to glue the saddle on. I covered it with tissue paper and an extra layer of crepe paper that I just freehand cut out. You can add ribbons, trim, miniature pom poms, lots of tassels, whatever you want to decorate the saddle.

Obviously, if you want the saddle to hide a secret compartment, don't glue down that side. 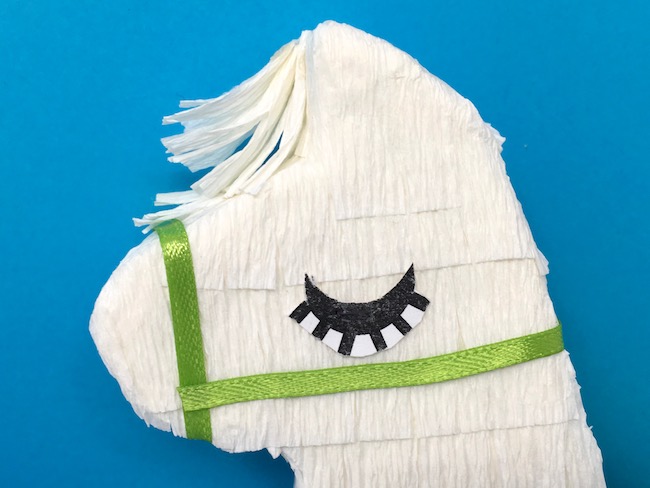 Cut out the eyelashes from the pattern template. I didn't bother cutting out the individual lashes. Now glue to the little llama. I put them about ½ down the face. Just play around to find the placement you like.

Add the ribbon bridle around the nose and neck

I kept the bridle kind of simple with 2 lengths of ribbon around the nose and the neck glued directly to the llama. 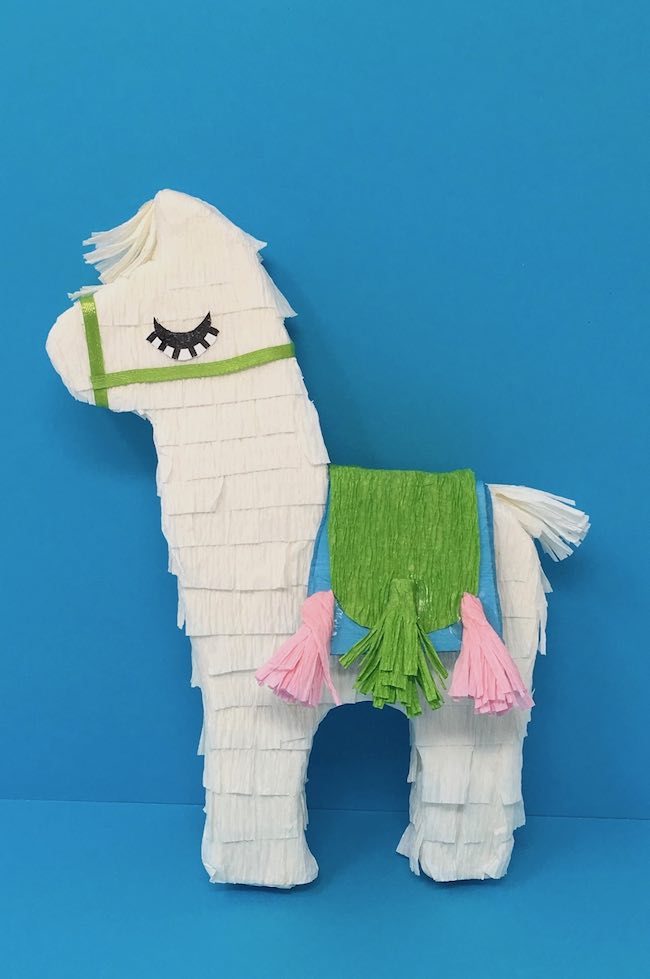 Now decorate as much as you want. Again I made pretty simple llamas with only a few fringed tassels on the saddle, but you can add lots more embellishments on the bridle and saddle. You can paint the feet a different color. You could even have gold feet on your llama. One crazy variation on the llama piñatas is called the llamacorn. Llamacorn? Yes, a combination llama and a unicorn. 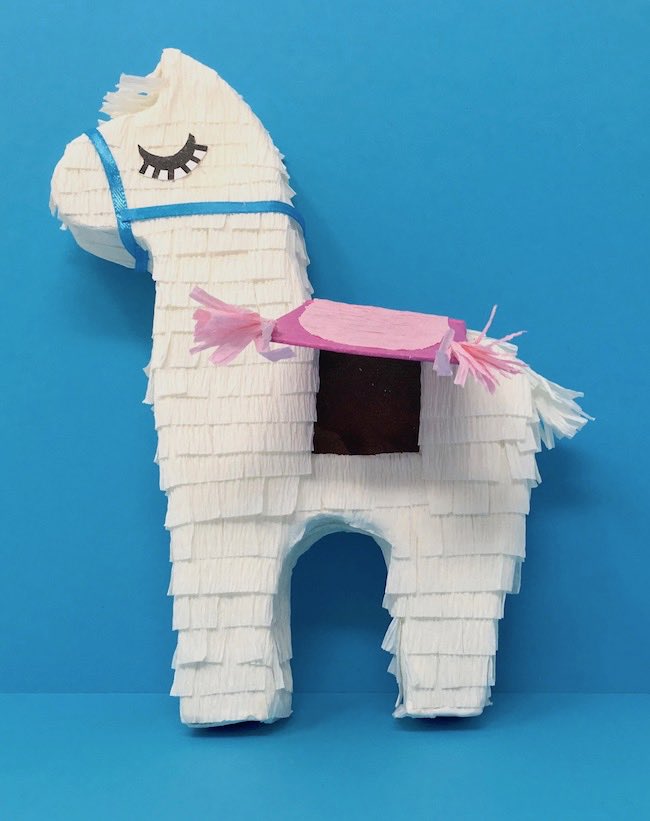 Finally add a message or stuff a few small pieces of candy in the trapdoor under the saddle. Now you have your very own "loot llama" like the one that delivers loot on the Fortnite video game.

And speaking of videos, here is my short video on Making the DIY Mini Llama Piñata

There are so many other things you can do with these funny little piñatas. I mentioned the llamacorns - llama unicorn hybrids for cuteness overload. You can make them smaller and add a cord to hang them on a Christmas tree as ornaments. You could enlarge the pattern and make a real full-size llama piñata. And then there is the Loot Llama from the Fortnite who actually looks like a piñata in shades of purple and blue. He delivers supplies in the online game. You could even make a variation to look like him if you have Fortnite fans in your family.

So I hope you will try one of these mini llama piñatas because they are seriously cute and people will enjoy them as gifts or as decorations.

Here is a photo from Lottie who made 30 Mini Llama Piñatas for a party. Very impressive. 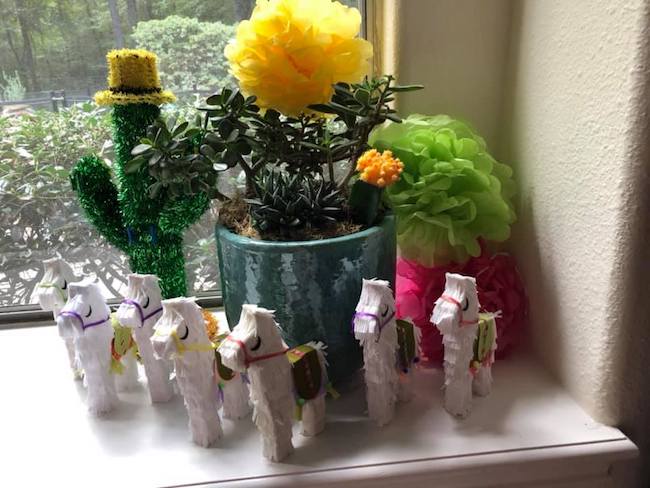 And here is a photo from Alta who made 2 Mini Llama Piñatas. 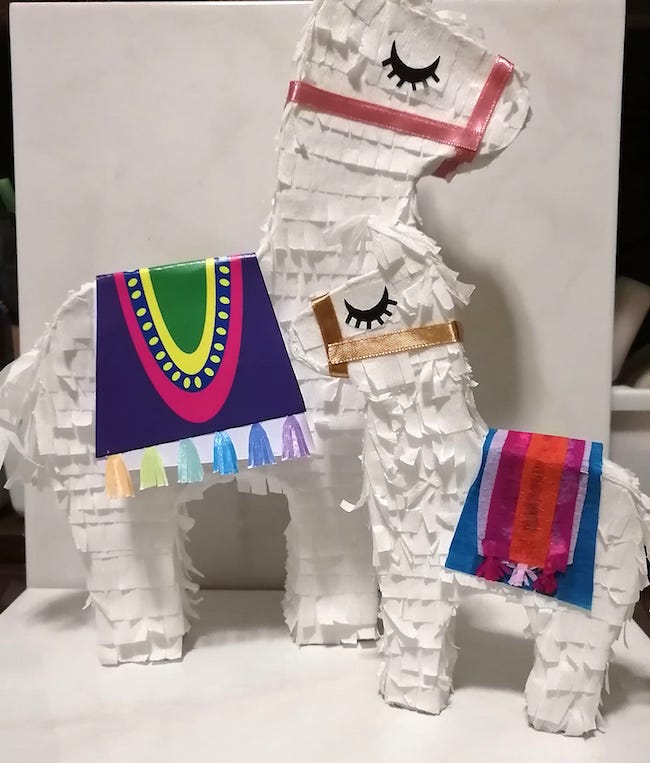 Let me know if you have any questions about making this Mini Llama Pinata. You are always welcome to pin my projects on pinterest. And I now have a Facebook Group  - Paper Houses and Paper Crafts Hosts by Paper Glitter Glue where you can post your questions and your projects as well.

P.S. I have several other gift box or treat box ideas for you including a Gnome gift box. 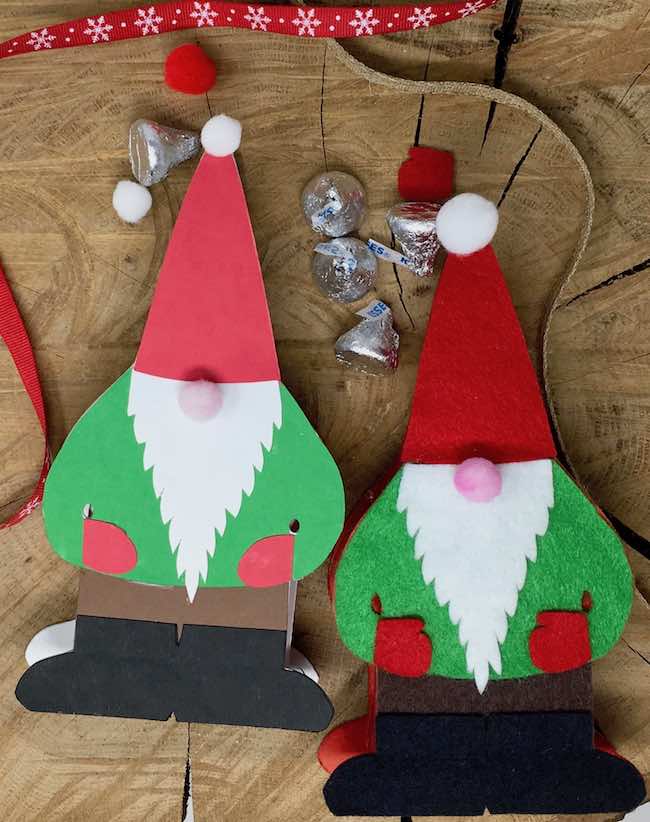 Here are other crafty ideas for boxes: 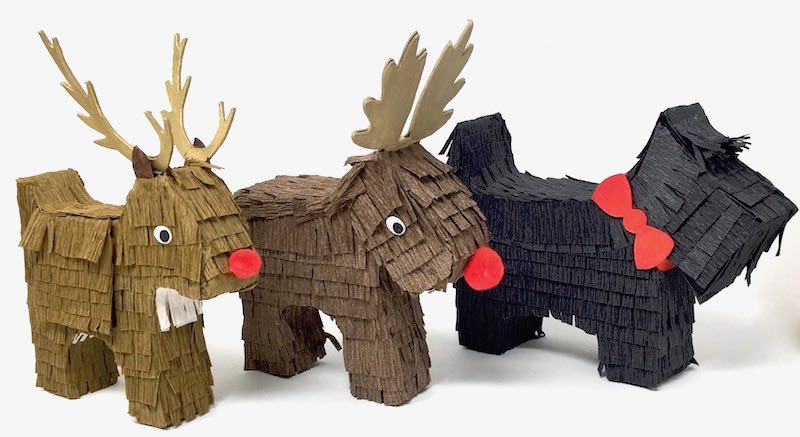 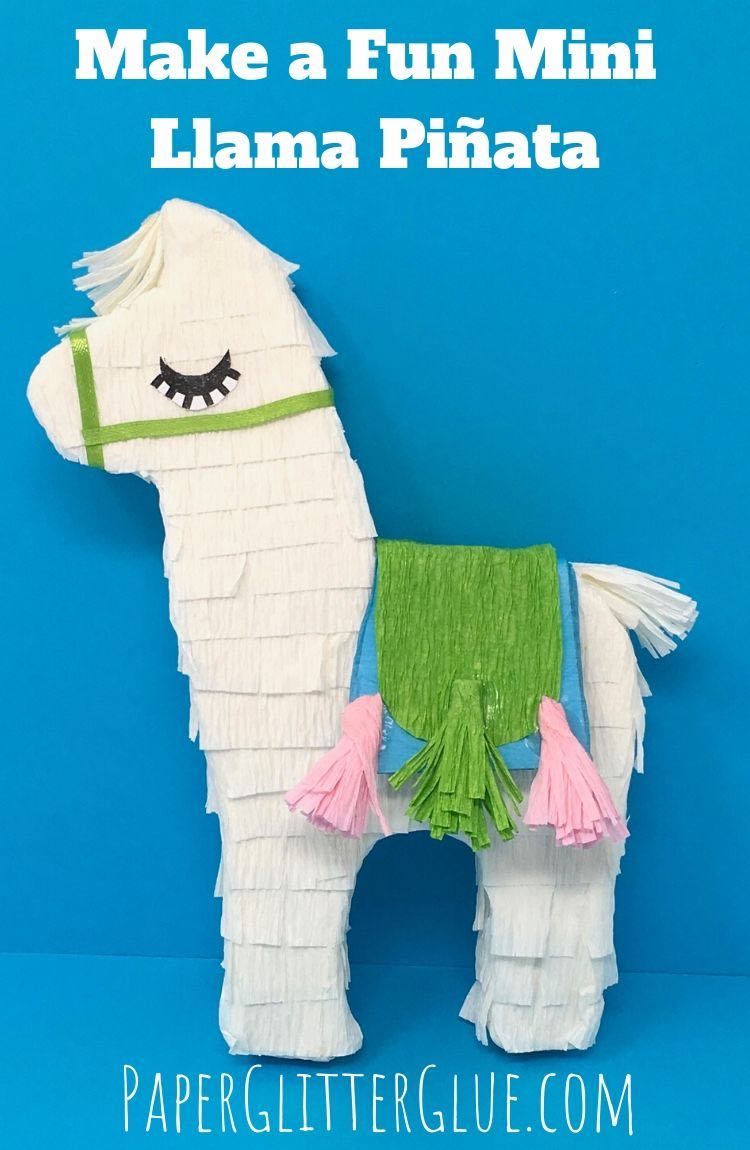 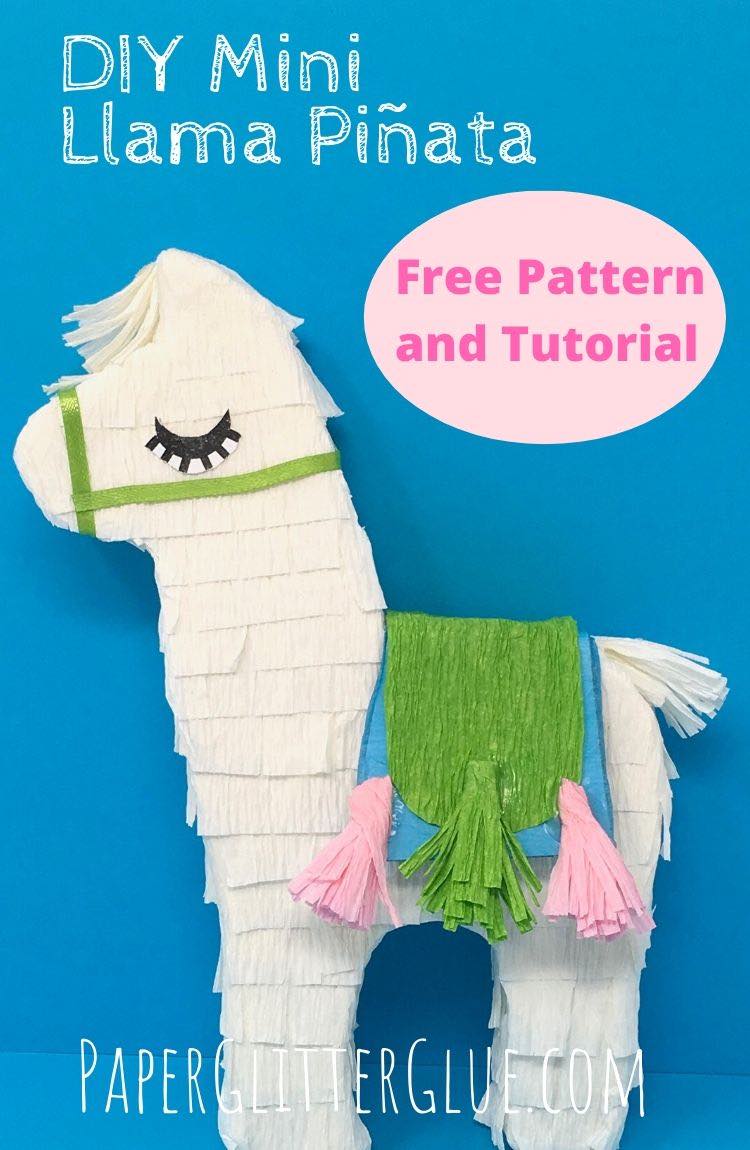 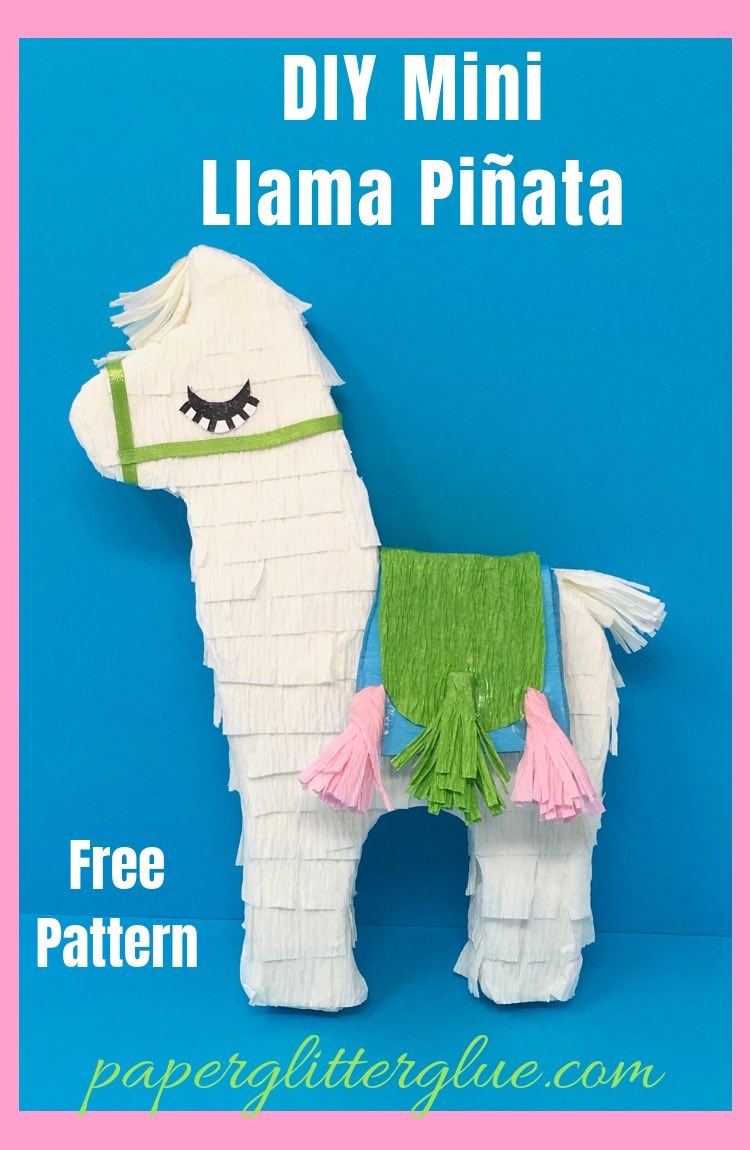 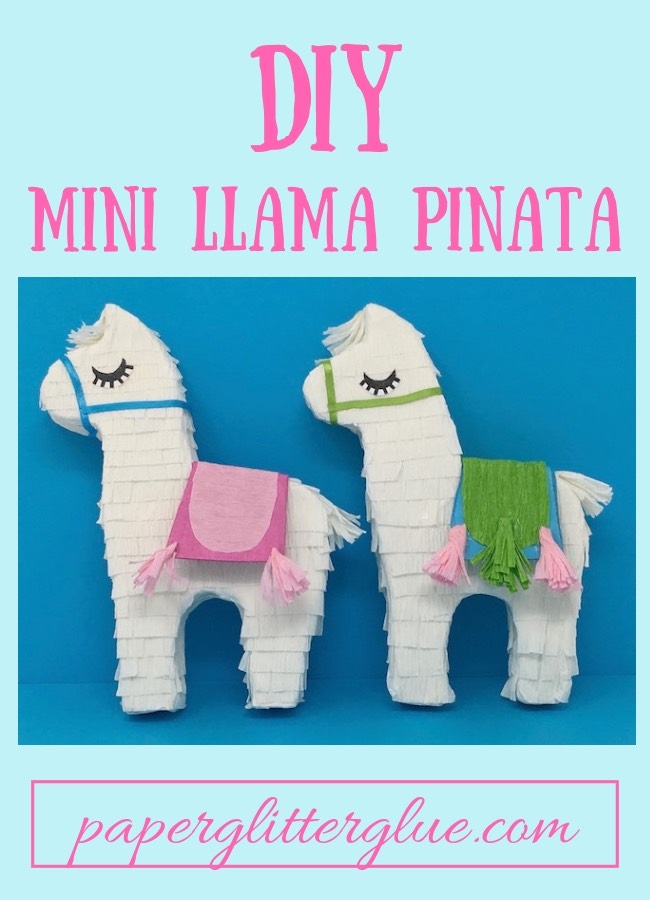