Here's a great way to make a cute paper wallets for gift cards or money. 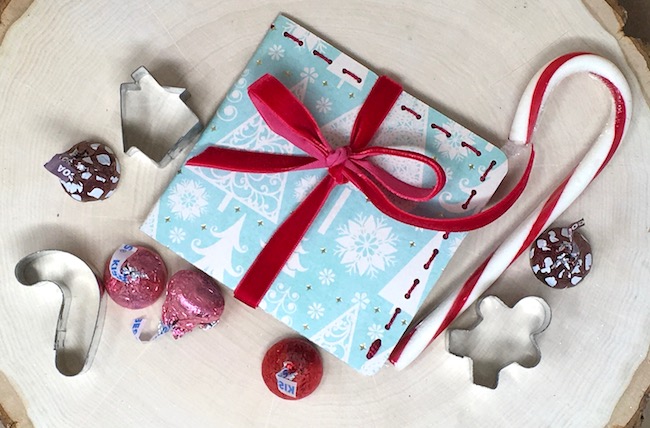 Here are two simple patterns for making Gift Card DIY paper wallets that you can make quickly. The first one is an origami wallet with no cutting required. For the second version I used my Cricut to cut it out, but you could easily cut it out by hand. And you can use all sorts of cute papers to personalize the paper wallet for your gift recipient.

Also I've included an instructional YouTube video on making the paper wallets if you learn better that way.

So this is the another project of the 15 Days of Holiday Craft series. Did you see the Red Roof Holiday Cottage - that's the first Christmas house in the series? Here's the project list: 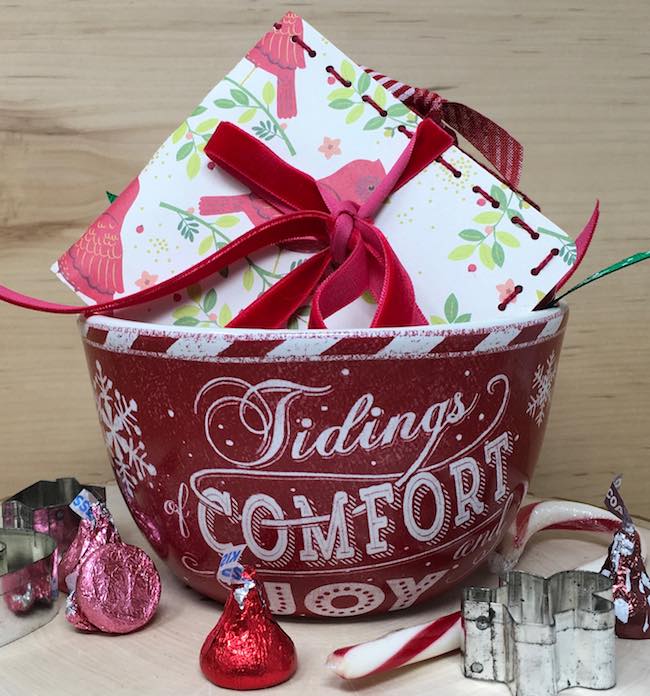 Here's how you make each paper wallet.

Directions for to make a simple Origami Wallet

How to Make the Origami Wallet for Gift Giving 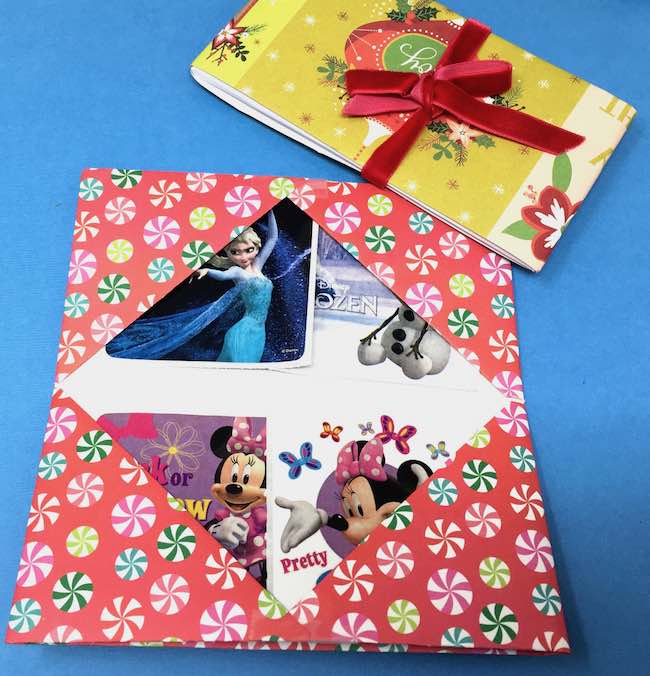 Now here are more detailed instructions and photos to help you understand how to make the wallet. Let's start with the origami wallet. You don't need a pattern for this paper wallet. It's just folded paper. And it's fast and easy.

First start with a 12 x 12 inch piece of scrapbook paper and fold in half. 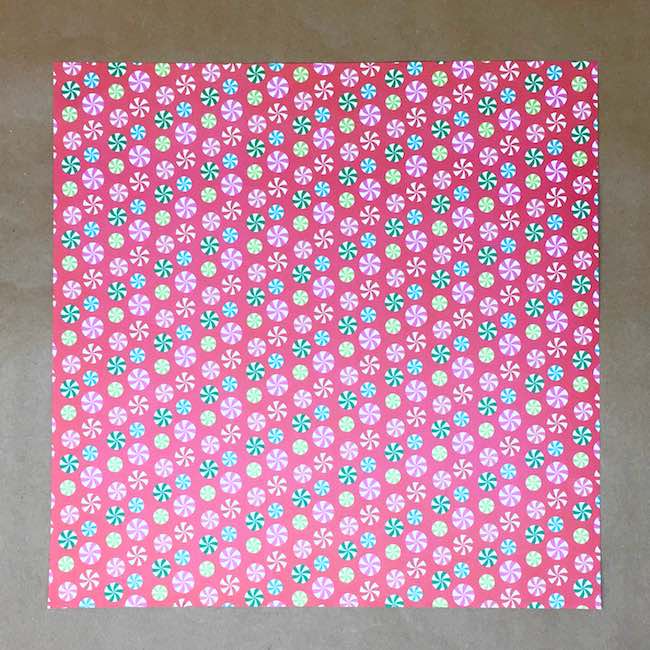 This makes a good-sized wallet. Fold the 12 inch scrapbook paper in half and crease well. 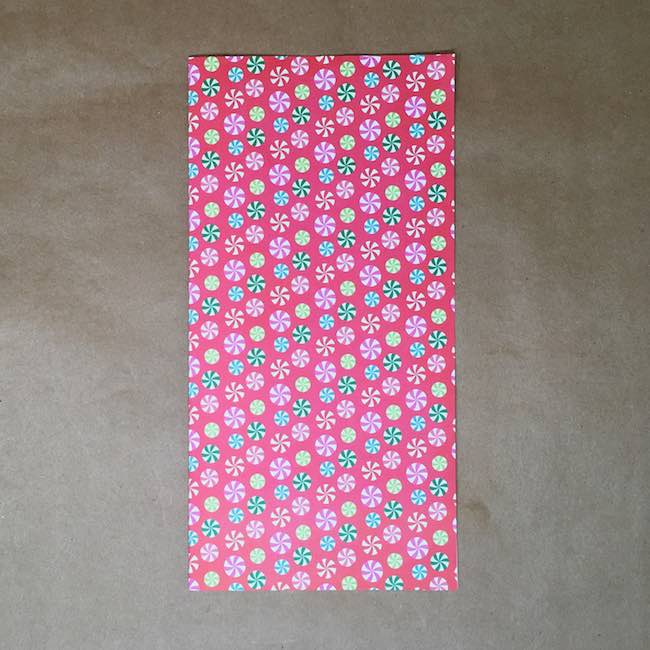 Next fold each of the sides just to the middle fold

Next fold each of the sides just to the middle fold and crease. 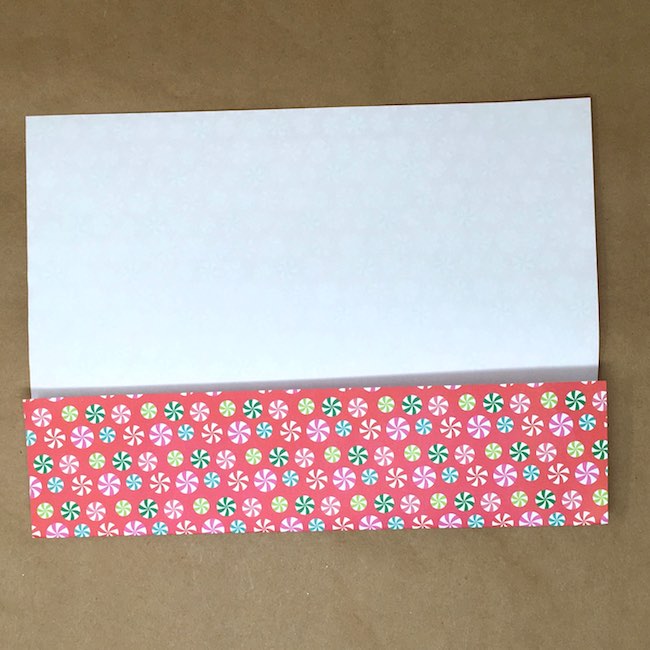 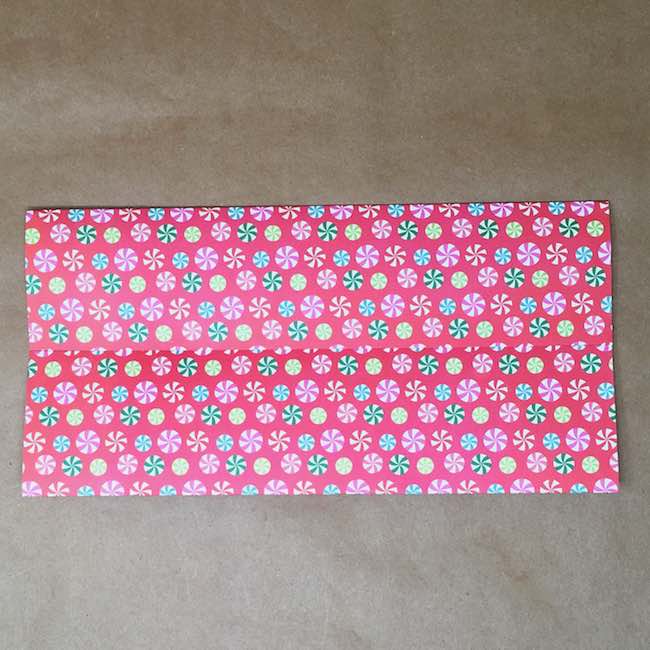 Now fold in each corner of the paper to the side fold, not the middle fold. 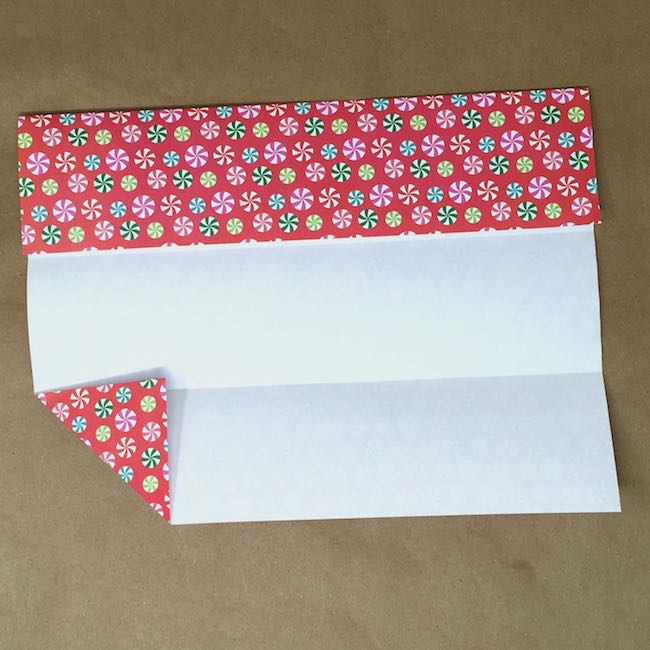 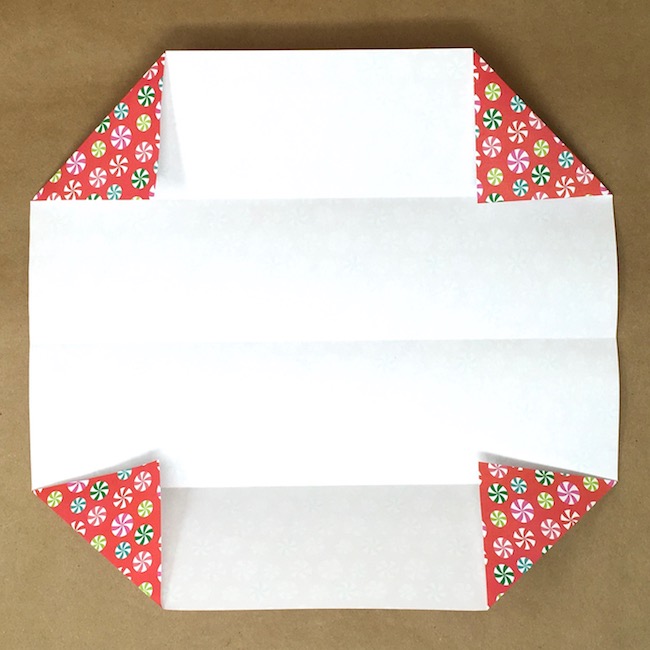 Fold both flaps to the middle

After you have folded all the corners down, the fold the flaps to the middle fold line. See the V-shape that the folded corners make? You will use that as a marker in the next step. 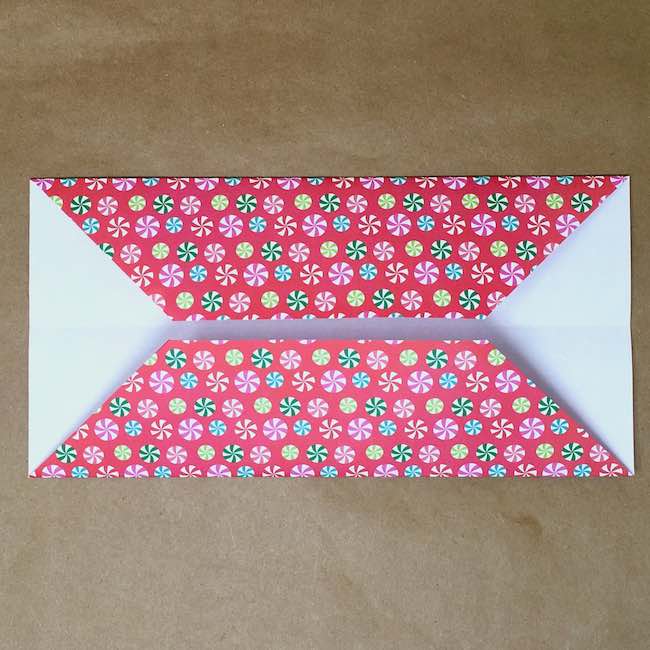 Turn you paper over so the folded flaps are underneath

So turn the paper over so the folded flaps are underneath. 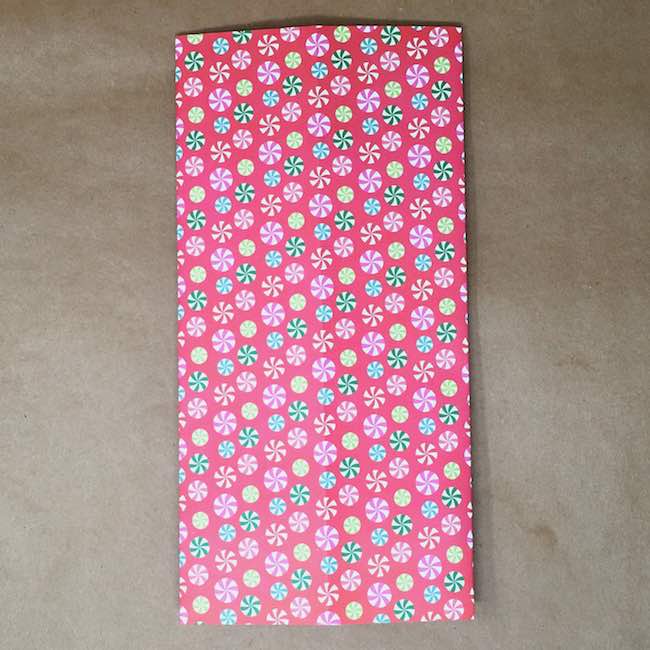 Pick up one end of the paper and bring it up to fold to the middle of the paper. You will know it's the middle when you see a V-shape from the folded corners. 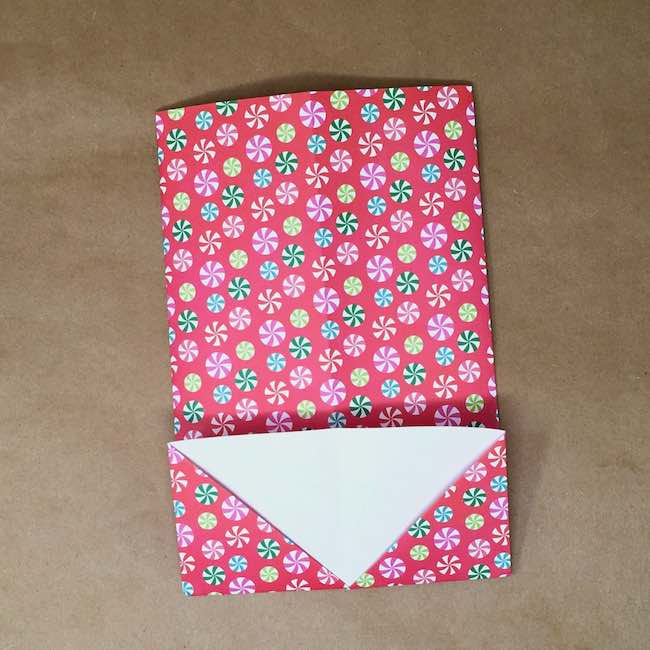 Now fold and crease the paper well when you have the bottom of the V-shape in place.

Then fold the other side the same way, but fold it so that the edges can tuck in

Do the same thing with the other side except that you may have to bring it up a little more to make the edges tuck in on the side. 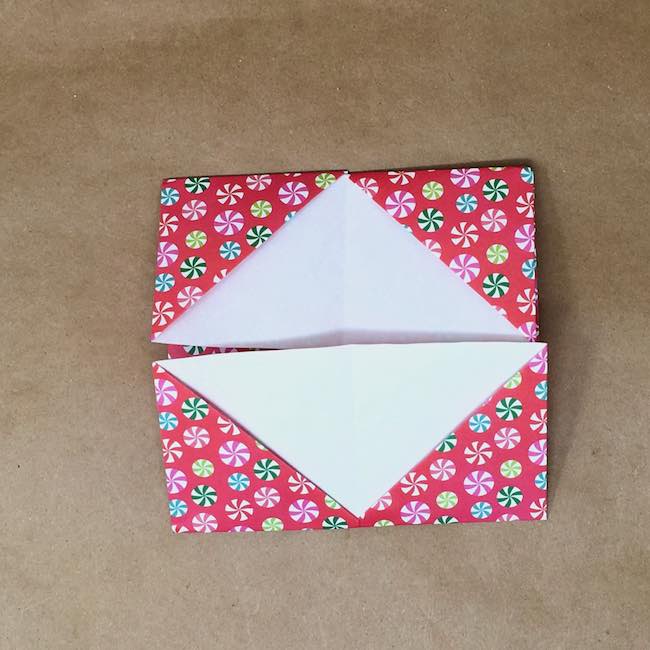 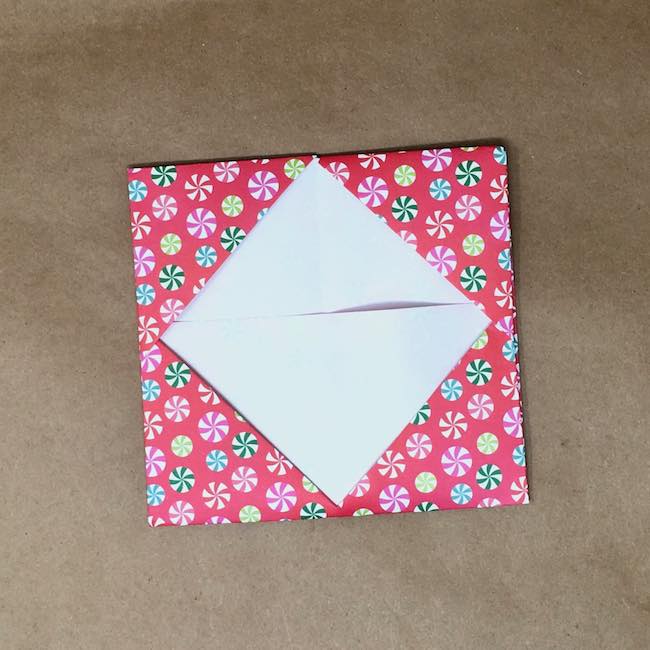 Next you have to use a little tape to keep the wallet together. That's because people can't help but unfold it and then they can't seem to get it back in place. This is especially true of kids. So I put a small piece of tape on the paper overlap in the middle and 2 more pieces on each side where a wallet pocket is formed. 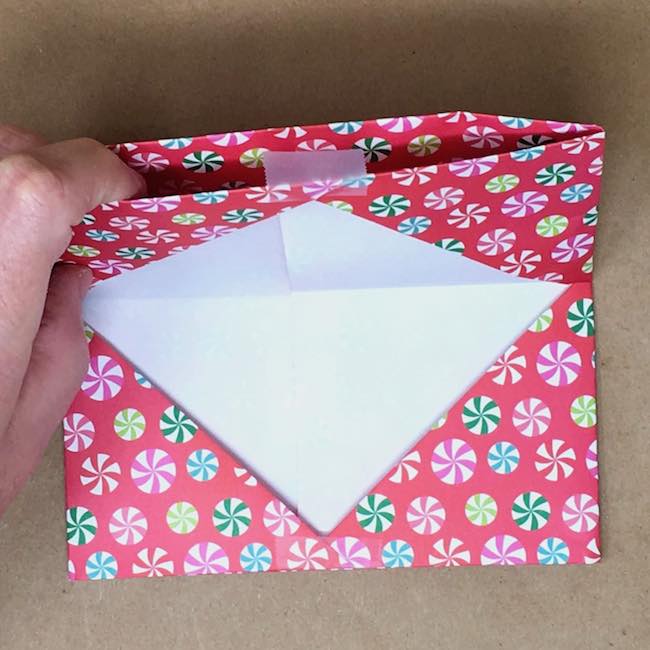 This is where I first got the idea to make a gift card wallet from Cathe Holden at the Inspired Barn. Her version is really adorable. 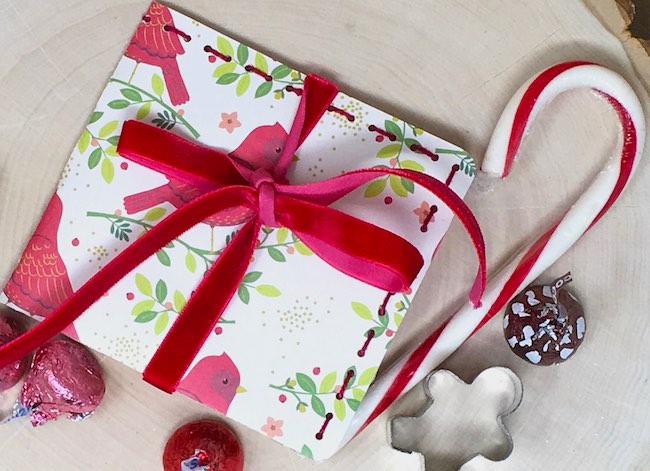 First download the pattern from the Paper Glitter Glue library. The pattern is in 3 formats - SVG, PDF, and DXF. Choose whichever one works better for you. I use the SVG pattern with my Cricut cutting machine.

So to get the pattern just type in the password and you have access to all of my patterns and files and tutorials. If you don't have the password, just subscribe to my newsletter with the form below and I will send you the password right away.

And here is how the pattern looks in Cricut's Design Space. You have to be sure to designate the score lines and attach them so the machine will cut or score the lines properly.

Below is the main body of the wallet in Design Space. This one does not have any perforations. 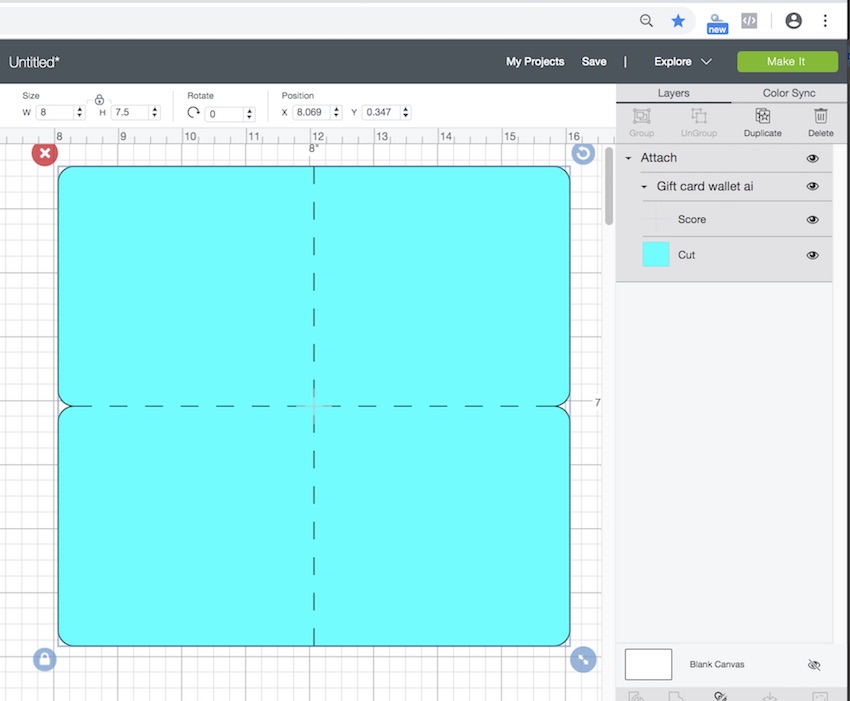 Next is the wallet with the perforations around the edge. 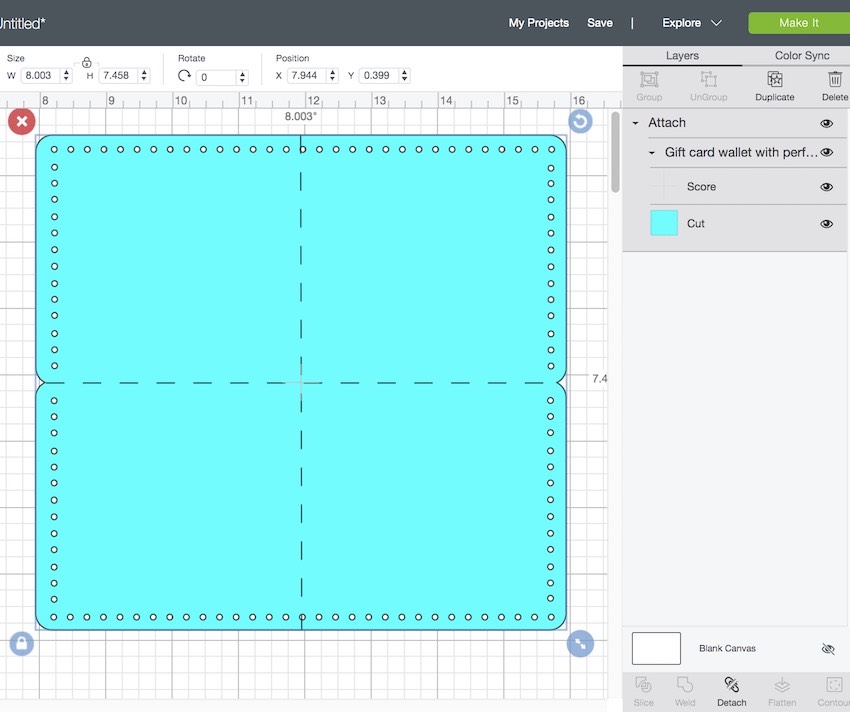 And here are how the wallet insert pieces look in Design Space. Please note that the set of score lines for the triangle looks like a solid shape until you change it to the score lines. 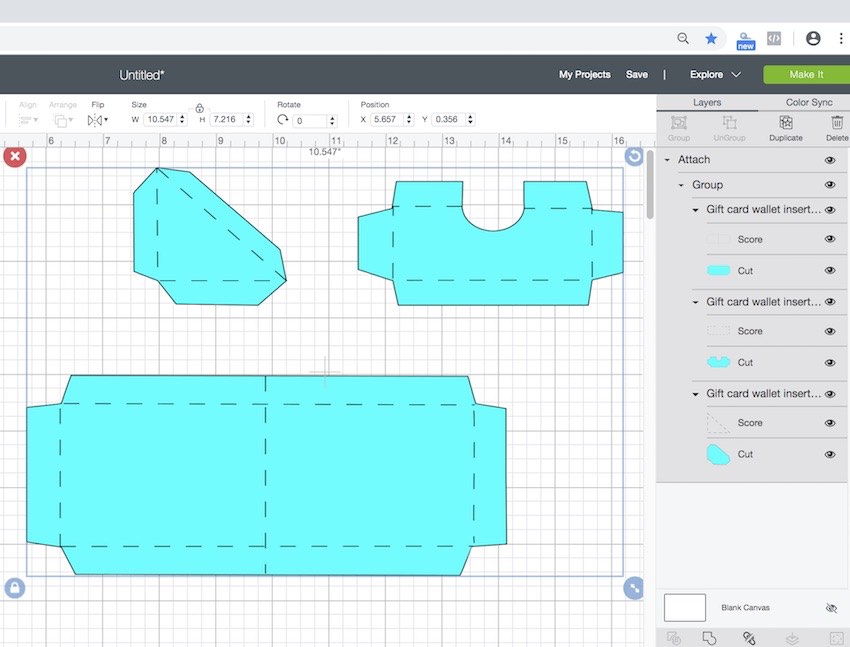 Fortunately all the pieces for one wallet fit on one Cricut mat and looks like this: 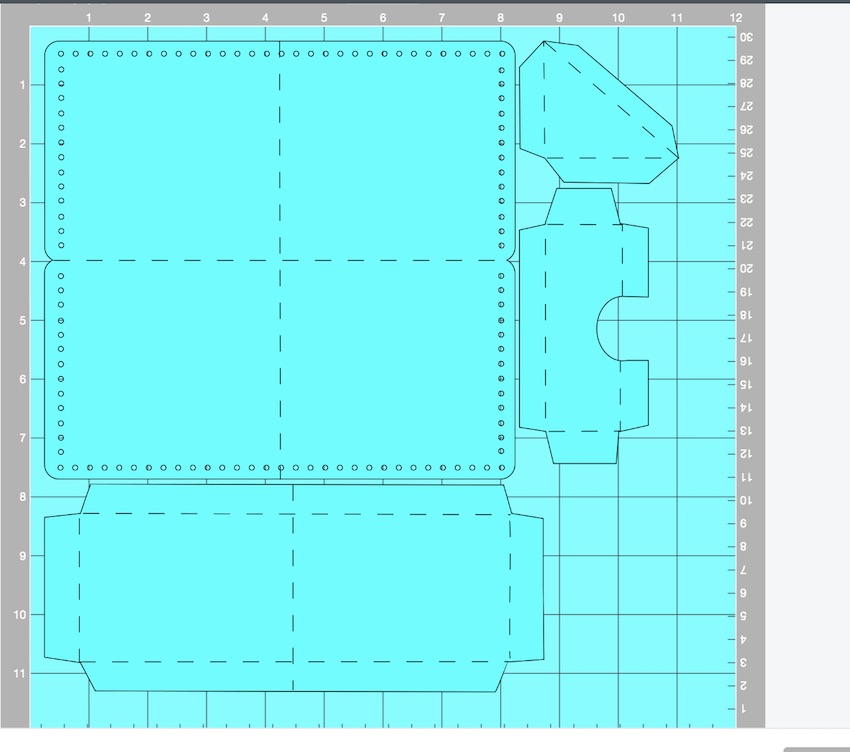 Now cut out the pattern pieces. If you are making the one with the perforations, know that it takes a while to cut out all the tiny holes. Just a little warning there.

Glue the outside wallet sides together

Next glue the main body of the wallet together. It's designed this way to be a little stronger and to have pattern on both sides of the paper. I used a thin but quick drying glue called Art Glitter Glue. It has a nice tiny tip and spreads easily and dries fast. But really any white glue would work. I just wouldn't put on a thick layer because it will make the paper lumpy. 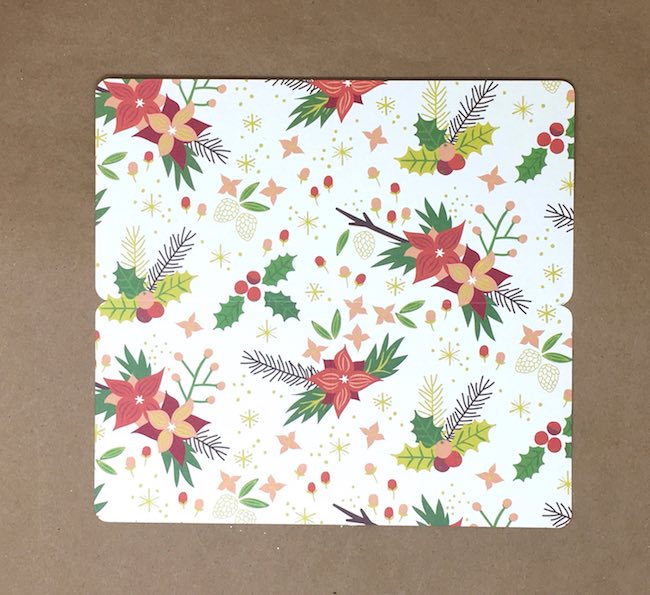 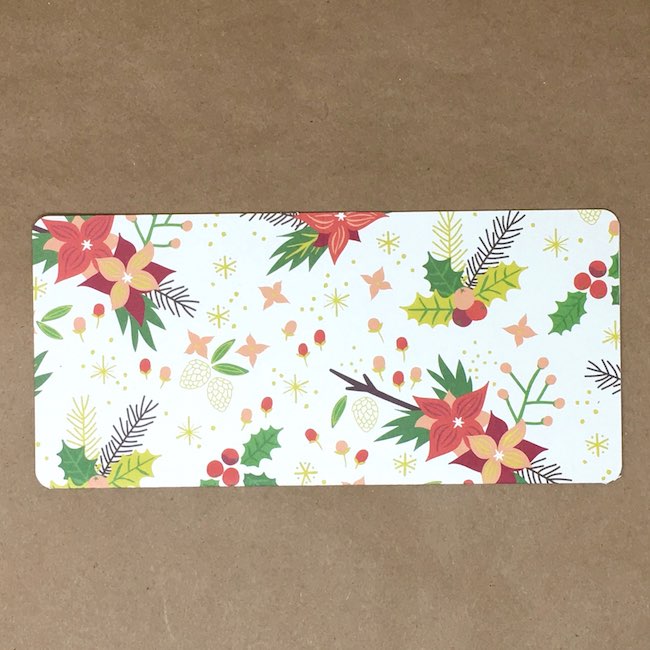 Fold along score lines for the longer money insert piece

You really can't see it in this photo but there is a score line in the middle of the money insert strip. When you glue the other two parts on make sure that they don't interfere with that fold line. 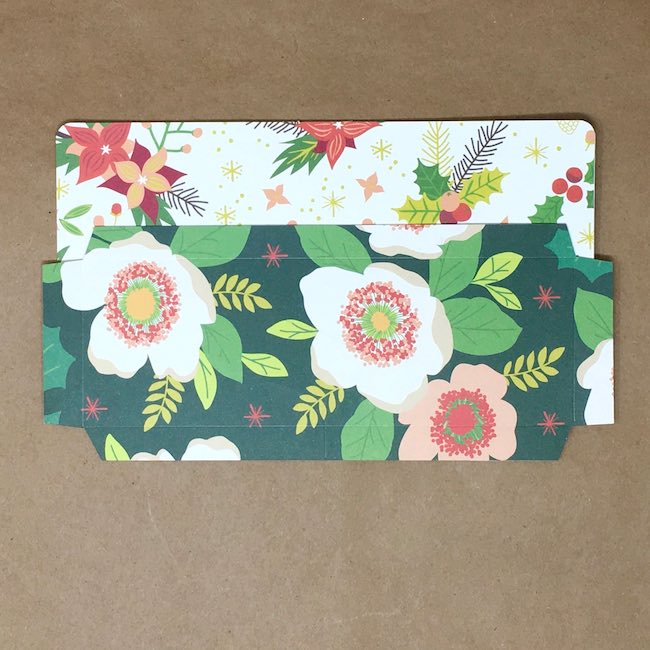 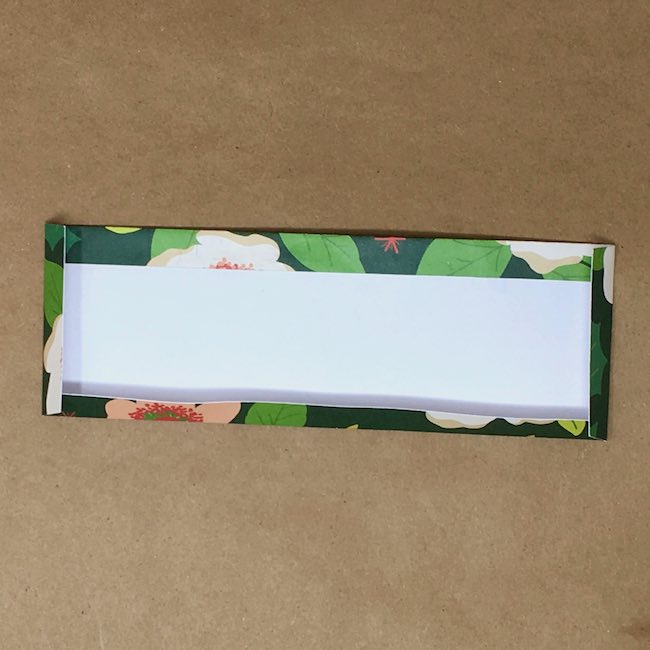 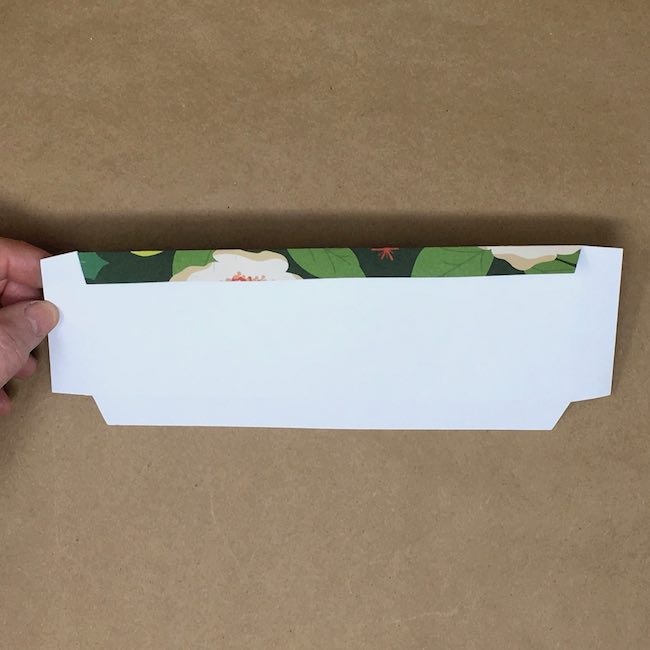 But don't glue it to the main part of the wallet yet. Next make the gift card insert.

Fold the score lines on the gift card insert

Here's how the gift card insert looks before you fold it. It's got a cut out to make it easier to remove the gift card. 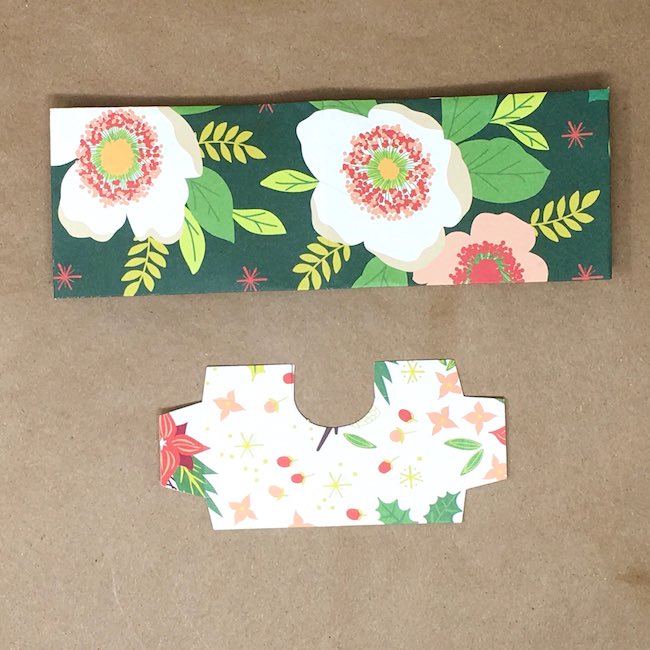 Glue down the top fold

First glue down the flaps at the top of the gift card insert.

Now adhere the gift card insert to the longer strip

Next apply glue to the flaps of the gift card insert and apply pressure to adhere it firmly to the longer strip. Be sure to arrange it so it doesn't interfere with the fold line in the middle of the longer strip. There is a score line there as well.

Fold the score lines on the triangle insert

Next fold along the score lines on the triangle insert. 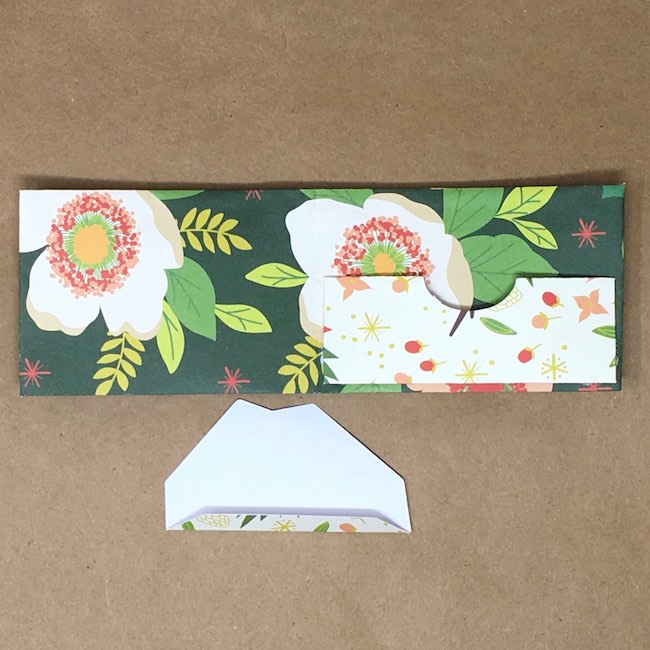 Glue the long fold on the triangle insert

Next glue the long fold on the triangle insert. Doing this just gives more support and makes it less likely to tear easily. Fold the other flaps back.

Adhere to the money insert

Just like you did with the gift card insert, glue the flaps to the money flap and press firmly. You can check to make sure that the flaps aren't glued shut by testing with an old credit card. 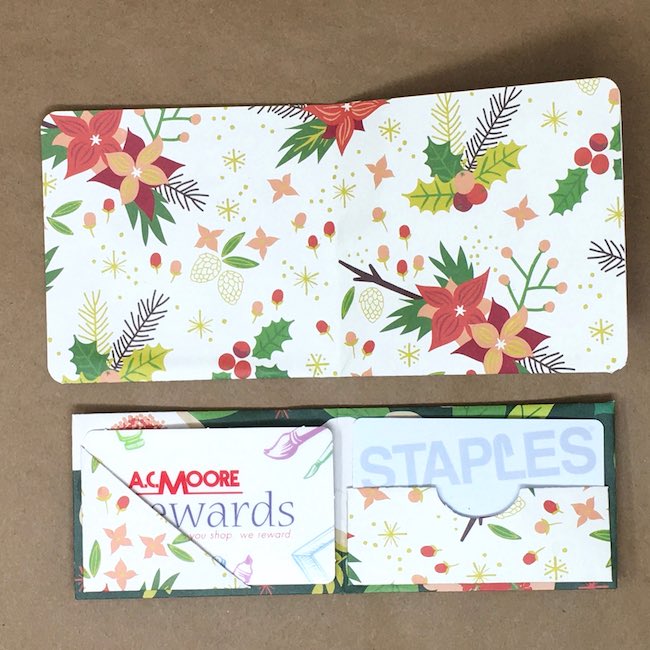 Glue the money insert to the body of the wallet

Now that the 2 pockets are glued to the money flap, glue it in place. Make sure to line up the fold lines in the middle of both pieces.

Let the glue dry before you fold it because things slip if you fold them before the glue is dry.

And finally fill your little paper wallet with a note or a gift card or money for your loved one. 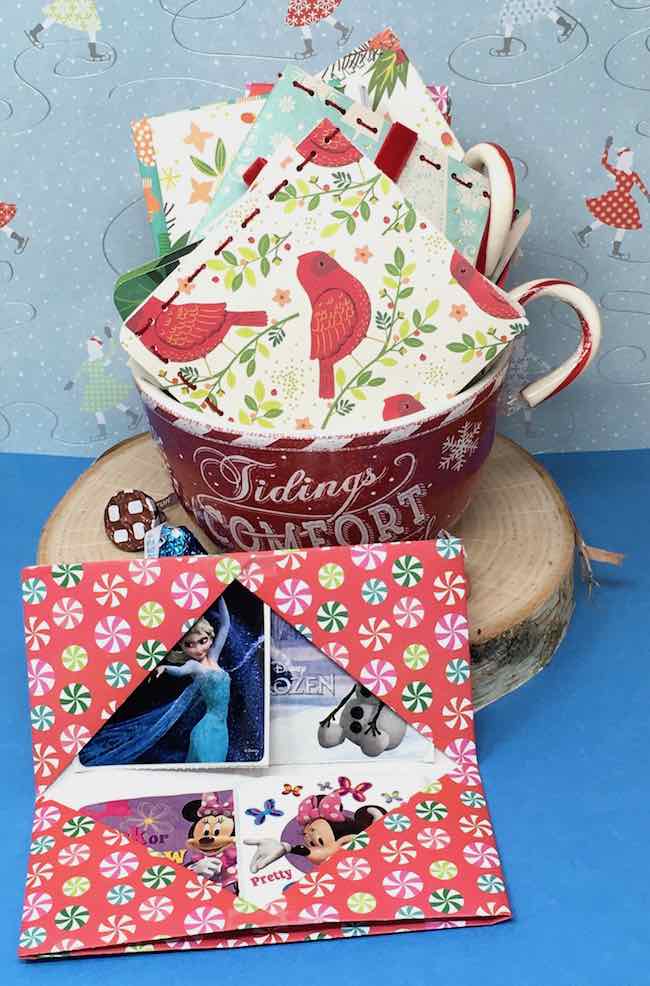 And that is how you make your DIY paper wallet.

If you have any questions about how to make the little paper wallets, let me know.

I hope you are able to enjoy making some creative projects this week.

« How to make a Gingerbread Paper House (with an amazing scent too!)
Paper Gingerbread Ornaments »